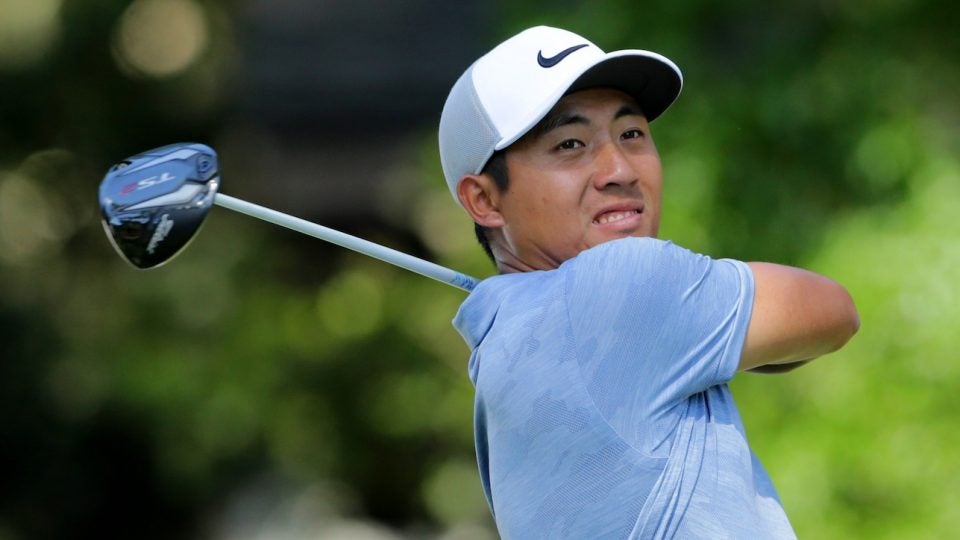 Coming off the first PGA Tour win of his career at the RBC Heritage, C.T. Pan spoke with GOLF equipment editor Jonathan Wall about the gear in his bag. After spending more than a year playing a mixed bag following Nike’s exit from the hard-goods space — Pan still has an apparel contract in place with the Swoosh — Pan chose to go with an almost all-Titleist bag that’s highlighted by the brand’s TS2 driver and Pro V1x ball.

During the interview, Pan touched on his love for the University of Washington, why he wishes he switched to Titleist’s Pro V1x ball sooner, driver testing and his purple True Temper wedge shafts.

What made you finally switch to an almost all-Titleist bag after playing a mixed setup after your Nike equipment deal dissolved?

C.T. Pan: When I was younger, a junior golfer, a college golfer, I mostly used all Titleist stuff, so it was pretty easy for me to come back. When I set it up, I know Titleist has been really reliable and consistent my whole career. It was actually a smart move. I love the new driver and everything it offers — speed, distance, tighter dispersion. I think everything is just a big improvement from before.

Speaking of Titleist’s TS2 driver, can you walk me through your driver fitting process?

Pan: When it came out, I talked to all the players, and they loved the new driver. So I was very interested in it, and I remember, it was in November, I gave it a shot. The look of the TS2 head just fits my eye at address. Honestly, it was very easy to do this transition because I’m using the same shaft as I used before. I simply switched to a different head. It was very straightforward. The numbers — low spin, more distance — looked good on TrackMan, which did it for me. The whole process took not even 30 minutes. I’m still using the same setup.

How much do you rely on launch monitor numbers versus what you’re seeing and feeling to tell you if a club is right for you?

Pan: I would say I’m not relying on TrackMan that much. To me it’s more about the feel, the look. If it’s a club that looks good to me, to my eyes, and is comfortable, that’s very important to me. I’ve done many testings and sometimes you hit a really good shot on the range with the TrackMan, but you go out and then play the course and it’s not good. So I do prefer to just go out and play a couple of holes with it. And if it shows me good results, I know this is it. So I would say I’m more like a natural feel guy. Old school, I guess.

Specifically, what is it about the TS2 head at address that appeals to you?

Pan: It looks squared up to me, which makes me feel like I can hit it up in the air easily. It gives me feeling of comfort which results in a better, smooth swing.

Do you give Vokey wedge rep Aaron Dill creative freedom when it comes to stamping your wedges, or do you like to have a say in the process?

Pan: I simply tell him to surprise me because I know he does a lot of creative stuff with his stamping, and he knows how much I love [the University of Washinton].

The last time, he knew I wanted the black finish on my wedges, but other than that, I told him he could do whatever he wanted. Just surprise me, and he did a great job too. It turned out amazing. This is my first time using the black finish and I’ve had this particular set of wedges for almost two months. The dark finish doesn’t show the glare, which really helps me too.

What’s the benefit of having a 64-degree Vokey wedge in the bag over the more traditional 60-degree option?

Pan: I’ve been using the 64-degree for almost two years. The reason why is the way I pitch, or even chipping around the green, I hit a lot of low spinners. And on the PGA Tour with firm greens, even the grass is always too slow, too late to grab the green and coast it, like bounce over the pin. So I’m just trying to find another way to go around it without changing my technical stuff.

I thought why not just add another club, a 64? I can hit it higher, and it’s helped me a lot on the pitch shot. 64 is also soft and spinning to the tight pins, front pins.

How recently did you add Titleist’s 2019 Pro V1x to the bag?

Pan: Last week was actually my second event to use the Pro V1x. I just didn’t want to change my stuff because it was working so well. But the new ball is actually better in a lot of ways. For me, it’s more speed and less spin, which helped me a lot [at RBC Heritage] because it was very windy out there. And I was able to hit a lot of controlled shots out there. It feels even more durable, and it’s better in a lot of ways. I wish I’d switched earlier. I was too conservative.

So is ball testing as easy as driver testing seems to be for you?

Pan: Honestly, it really is a similar process to the driver. I just grab a couple balls, and I go out and play a couple holes. And I see some numbers on the TrackMan. And it looks good. And I just feel like it’s all about the feel to me. So if it looks good, it feels good … it really only takes me one day to go, “Okay, I’m switching.”

The Titleist Tour reps must love how low maintenance you are when it comes to testing gear.

Pan: For sure. [Titleist Tour rep] Larry Silveira usually says, “I only see this guy twice a year.” It’s probably a little bit more than that, but I’m very easy going I guess.

Have you always been that easy going with your gear?

Pan: Yeah, I always say it’s the Indian, not the arrow. I don’t find much trouble in switching equipment. I’ve been using Titleist for a good portion of my career, so I guess that’s pretty easy to stay with it.

Is there anything special about your Scotty Cameron prototype putter?

Pan: It’s a standard 009. It has my special stamping on it, but there’s nothing special about the specs. It’s 34 inches and just looks good to me at address and has a solid feel. I’ve used it for almost two years and haven’t seen a reason to switch.

I know you played golf at the University of Washington, but there has to be a story behind your purple True Temper wedge shafts. What going on there?

Pan: That’s an interesting story there. A couple of years ago, True Temper came out with a special color purple shaft and I thought they’d be perfect for me to represent “UDub.” I came to find out that one of their tour managers went to Washington as well, which is how the shaft came about. He ended up coming to a tournament and built me a couple wedges with the purple shaft. I’ve been using it since then, for two years. I get a lot of comments from other guys on Tour about the shafts.

I initially thought the purple would kind of stand out when you looked down at the club, but it’s actually not that bad. It looks good. I love purple too, so I’m biased.