‘I kept fighting with my heart’: Hideki Matsuyama gave everything in Olympic heartbreak 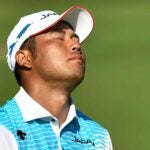 Hideki Matsuyama was among the losers in the seven-way playoff for the bronze medal at the Tokyo Olympics.

In theory, Matsuyama’s bid at Olympic glory was successful. At the end of 72 holes on Sunday at Kasumigaseki C.C., the 29-year-old found himself in third-place among the 60-player field. Sure, that wasn’t quite “gold medal” quality, but no one could be upset with a bronze.

In practice, it was a bit more complicated. After 72 holes, Matsuyama found himself with company in third place, and a lot of it. A seven-man playoff ensued for the last of three Olympic men’s golf medals, behind gold and silver recipients Xander Schauffele and Rory Sabbatini. On the first playoff hole, Matsuyama’s par putt skidded past the hole. Five of the other seven participants played on (with Taiwan’s C.T. Pan emerging to claim the bronze), but Hideki stayed back. His Olympics were over in heart-wrenching fashion: a tie for fourth place.

“I was not able to deliver the performance I was hoping for,” Matsuyama said after the round Sunday. “At one point of the round, there was a moment where I could potentially catch up and move past the leaders. But I just was not able to put it together at the end. There are some things that I’ve identified that I need to work on, which I hope to work on moving forward.”

The burden of expectation fell with added weight upon Matsuyama, who represented his home country at the Games just months after claiming his first major championship at the Masters. Back home in Japan, he’s a sports icon. A man whose every movement attracts the attention of dozens of journalists, and whose comparative anonymity in the United States is offset by fervent, even fanatical support among his country’s golf-obsessed population.

The Olympics represented a golden opportunity for Matsuyama (pun intended) to win an event of major significance on home turf. An opportunity to pay it back (and forward) to his home country in one of the rare international events ever contested in it.

But not all Olympic stories end in triumph. In fact, the majority end in heartbreak, which not even the typically forthright Matsuyama could hide Sunday.

“My goal was of course to win the gold,” he said. “I knew that if I had ended my round with birdie, I was going to get a bronze medal. I’m left with a frustration that I wasn’t able to convert the opportunities.”

In a dozen years, it’s unlikely many will remember his fourth-place finish at the Tokyo Olympics. But for the moment, it’s safe to assume Sunday won’t quickly fade from Hideki’s memory.

“I have no energy or endurance left at this point, but I kept fighting at the end with my heart,” Matsuyama said. “Unfortunately, I fell short at the end.”

Even with no fans in attendance at Kasumigaseki C.C., Matsuyama couldn’t escape the spotlight. He rarely does, even when he’s playing without home-field advantage. This is the social contract of professional sports: victory is communal, but so is defeat.

Perhaps we’re the lucky ones.