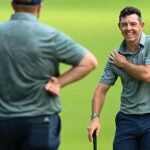 Rory McIlroy has had a change of heart about the Olympics.

Rory McIlroy’s comments coming into the Olympics were akin to a kid being shipped off to summer camp against their will. He was resigned to the fact that he’d be in Tokyo the final week of July competing for a medal, but he didn’t exactly seem thrilled about it.

“I don’t know if there’s much to look forward to,” McIlroy said at The Open when asked about the upcoming Olympic golf competition. “I’m looking forward to getting another week of golf in and trying to get my game in shape … I’m not a very patriotic guy. I’m doing it because I think it’s the right thing to do.”

This came after years of McIlroy downplaying the personal importance of the Olympics to him and even skipping the Games in 2016.

“Just because of my personal feelings towards — not the Olympic Games, the Olympic Games are great, and I think golf included in the Olympics is fantastic — but for me, it’s just something I don’t want to get into,” he said at the time. “That’s a personal choice and hopefully people respect that decision.”

But even after making his feelings about his participation in the Olympics abundantly clear, he saddled up and made the trek to Tokyo to compete for a medal. And just like a kid forced off to camp, McIlroy’s attitude once on site have slowly changed.

Clad in an untucked shirt and no hat, McIlroy looks to be legitimately enjoying his week at Kasumigaseki Country Club. He’s had plenty of laughs with Irish teammate Shane Lowry, and his play hasn’t been too shabby, either.

Through 54 holes, McIlroy is firmly in contention to win a medal. He sits just three shots behind leader Xander Schauffele and is only one shot out of bronze medal position.

McIlroy was asked after his third round about his previous comments downplaying the Olympics — and the Ryder Cup — and he offered a sincere mea culpa on the matter.

“I’m thinking about that. I need to give things a chance,” he said. “I was speaking to my wife last night and saying maybe I shouldn’t be so skeptical. But I think I need to do a better job of just giving things a chance, experiencing things, not writing them off at first glance.”

This comes after earlier in the week when McIlroy hinted the Games were growing on him and that being a part of a competition that is bigger than himself — and bigger than golf — was “a pretty cool thing.” He added that he was already looking forward to Paris for the 2024 Games.