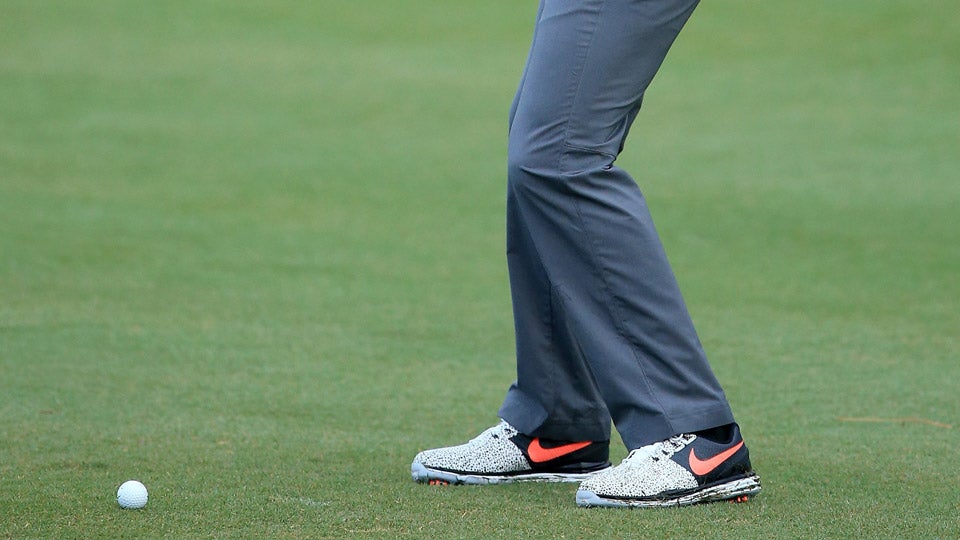 Most golf fans have realized by now that Rory McIlroy is the new face of Nike Golf. Not only is he the best player on the planet but Rory’s celebrity is growing with every dominating win. And while he will likely never touch Tiger’s fame or marketing power, he’s arguably the most valuable endorsement name in golf today.

To take advantage of Rory’s stature the Nike iD team created a custom version of his normal Lunar Control 3 shoe, which he wore during a practice round at the Honda Classic on Wednesday.

According to the folks at Nike, the design elements of Rory’s iD shoe include a color scheme from the original Infrared Air Max 90 as well as a safari print that was first used on the Air Safari shoe from 1987. Since the Safari design was used on Nike’s soccer boots at the World Cup in Rio recently the Nike iD team thought it was appropriate for Rory’s golf shoes, considering his love for the game of soccer.

To add further custom accents the names of Rory’s mother and father (Rosie and Gerry) were printed on the tongue of each shoe.

If you’re interested in creating your own Lunar Control 3 iD shoes ($210) visit Nike’s website, choose on of six basic design and proceed to customize everything from the color of your swoosh and sole to the laces, midsole, and just about anything else you can think of.