One of the craziest equipment stories of the year happened this week at the U.S. Open 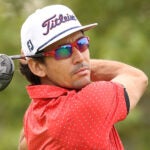 Rafa Cabrera Bello is tied for 3rd at the U.S. Open heading into the weekend.

It’s not uncommon for PGA Tour players to make a few equipment tweaks the week of a major. Typically, players will change to new wedges for fresh grooves, add a high-lofted wedge to deal with fast greens, or add a hybrid for higher launch. Rafa Cabrera Bello, however, who’s currently sitting at T3 in the 2020 U.S. Open, made a complete equipment overhaul.

On Tuesday morning, on the week of the U.S. Open at Winged Foot – one of the most difficult golf courses in the world – Bello changed 13-of-the-14 clubs that he showed up with on Monday. According to Titleist Tour Rep J.J. Van Wezenbeeck, though, the changes were actually a long time coming.

For years, Van Wezenbeeck and the Titleist team tried to convince Bello that his ball flight was too low compared to the top players in the world. While the Spaniard’s lower ball flight might be effective in the windy and firm conditions over in Europe, more of an aerial game is beneficial in America, especially at a U.S. Open venue such as Winged Foot.

Bello did go up in loft when he switched from a Titleist 913 driver to a Titleist TS3 driver last year, but he was reluctant to make any large-scale changes to his setup. This week at the U.S. Open, however, it finally happened.

Van Wezenbeeck told GOLF.com that the presence of Bello’s swing coach Sean Hogan at Winged Foot early in the week helped Bello see the light. And all it took was one question.

“Do you think these shafts are too stiff?” Hogan asked the Titleist fitters during a range session on Monday. Being that Van Wezenbeeck and the Titleist team had been trying to convince Bello to hit the ball higher for years, the answer was a resounding “yes.”

With the outside influence of his instructor, the floodgates were open for Bello to test new equipment.

Bello found better height with Titleist’s U500 long irons (3 and 4), and he also tested Titleist 620MB irons with Project X LZ 6.5 shafts instead of the stiffer 7.0 versions. The improvements were immediate. Van Wezenbeeck says that Bello increased spin and height, and he straightened out his face-to-path conditions. With the new irons dialed in, Bello requested the same softer shafts in his wedges, too.

After getting the new irons and wedges squared away, Bello was ready to test out new drivers and fairways, as well. Bello ended up changing into a new TSi3 driver (9.5 degrees), which provided more ball speed and stability. He also switched into new TS 3-and-5 woods that had lighter shaft weights than before.

Van Wezenbeeck and team tried to talk Bello out of changing everything at once on the week of the U.S. Open. Bello, however, squashed any doubt.

“I’m not playing well, so I might as well change to something I think will help,” Bello said, according to Van Wezenbeeck.

Bello is currently sitting at T3 on the U.S. Open leaderboard after missing the cut at last week’s Safeway Open and the PGA Championship. So far, the changes are working, but there’s still 36 holes of U.S. Open golf to be played.

Regardless of what happens, this story is the perfect example of why having an open mind when going into a club fitting is so important. It’s just that most of us aren’t fitting into a whole set of new clubs during the week of the U.S. Open at Winged Foot.

For the latest gear news and information, check out our latest Fully Equipped podcast below!

Could one of Phil Mickelson's most cherished clubs be coming to retail?

SPOTTED: What we know about Mizuno's new ST-X and ST-Z drivers