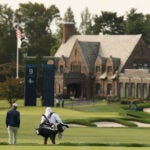 A view of Winged Foot's clubhouse during a U.S. Open practice round.

Winged Foot, host of this week’s U.S. Open, is one of the most exclusive and famous golf clubs in the world. Some of you might have even played it. And if you have, could you tell the rest of us what it’s like?

The Mamaroneck, N.Y., club was founded in 1921 and opened in 1923. It has two 18-hole courses designed by A.W. Tillinghast, and Gil Hanse renovated the West Course in 2015. (Both courses are on GOLF’s Top 100 Courses in the World ranking, the West at 23rd and the East at 62nd.) Winged Foot is known for its iconic clubhouse, thick rough and terrifying greens. It has also hosted several national championships and other marquee events.

The 2020 U.S. Open will be the sixth held at the West Course, and the East Course has hosted two U.S. Women’s Opens.

How much does a Winged Foot membership cost?

It’s not easy to get a tee time and it’s even harder to become a member. According to a 2018 Forbes article, the initiation fee is around $200,000, although the NY Post says the top echelon is closer to $150,000. The waiting list for the invite-only club is supposedly a decade long. While the club’s annual dues aren’t public knowledge either, they are reportedly around $15,000 a year, although that also depends on the membership type. Winged Foot, like many other clubs, has junior members.

While the initiation fee might seem like a lot — because it is — many high-end and storied clubs ask for much more than that. Some clubs on Long Island are rumored to have initiation fees over $1 million (like The Bridge in Bridgehampton, N.Y.). Other well-known clubs have a smaller asking price for initiation fees, although it’s the getting in that’s the hardest part.

Medalist, where Tiger Woods is a member, has initiation fees of $110,000 (with $18,000 in annual dues), although that hefty initiation price is sometimes waved for Tour pros.

Augusta National, the home of the Masters, reportedly has an initiation fee around $40,000.