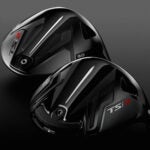 Two years after officially launching its TS2 and TS3 drivers, Titleist is introducing new TSi2 and TSi3 drivers. Titleist is starting the tour seeding process for the new drivers at the Safeway Open (PGA Tour) and Portugal Masters (European Tour) on Monday, just one week prior to the start of U.S. Open week.

As part of the debut, tour players will begin testing the TSi2 and TSi3 drivers and providing feedback to Titleist’s R&D team for final validation, according to Titleist.

“Over the next few days, Titleist Tour Representatives on site at both the Silverado Resort in Napa, Calif., and the Dom Pedro Victoria Golf Course in Algarve, Portugal, will be working with players on the range, fitting them into the new TSi driver models,” Titleist said in a press release.

Unfortunately, Titleist hasn’t offered any information yet about the products themselves, but let’s look at what we know so far.

In 2018, Titleist released its TS2 and TS3 metal woods as part of a “Titleist Speed Project,” where the company announced concerted efforts to increase ball speed. The TS driver line has been validated through its tour success – Titleist has been the most played driver on the PGA Tour the past two years running, according to the company. The list of notable users has included Justin Thomas (TS3), Webb Simpson (TS3), Adam Scott (TS4), Patrick Cantlay (TS3) and Jordan Spieth (TS3).

We can also tell a few things from the images provided by Titleist, and the images on the recent USGA Conforming Clubs List postings. The TSi2 driver appears to have a fixed weight on the rear portion of the sole, whereas the TSi3 driver appears to have a sliding weight mechanism in the back portion of the driver head. This would make sense since the previous TS2 driver had a fixed weight and the TS3 driver had Titleist SureFit CG (center of gravity) adjustable system.

Additionally, Ian Poulter took to his Instagram story to reveal what the TSi3 driver (and a TSi2 fairway wood) look like in real life. We were able to capture some screenshots from his post below.

As you can see in the photos above, there is something called “ATI” printed on the driver faces, and there appear to be five weight positions in the rear weight (T2, T1, N, H1 and H2).

Like the TSi2 driver, it appears the TSi2 fairway wood will also have a fixed weight in the rear portion of the sole. Lastly, Poulter’s post revealed that “TSi” is printed on the crowns of the fairway woods and drivers.

We will continue to update this post as tour players test the products and more photos surface.

For more on the latest tour news, don’t forget to listen to our latest Fully Equipped podcast.