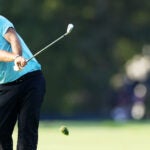 Patrick Reed hits a shot on the 5th hole at Winged Foot Golf Club on Friday.

Bryson DeChambeau hit his drive on the 557-yard par-5 9th hole, his closing hole after starting on the back nine, 380 yards down the right side of the fairway, hit his approach within about 6 feet and made the eagle putt. He finished with the day’s low round, and as one of only three players to shoot under par for the day. Towering tee shot, sensational second shot, precise putt. Boom, boom, boom. In contention at a major. BOOM.

Here are three things you need to know after Friday’s second round of the U.S. Open at Winged Foot.

Bryson DeChambeau shoots low round of the day

Winged Foot showed its muscle. As did DeChambeau.

DeChambeau had an eventful day, finishing with five birdies, five bogeys and an eagle on the par-5 9th, his last hole. He finished with a two-under 68 and a three-under total, which was two strokes off the lead when he finished, then was good for second when everyone else was done.

“I felt like a lot of things were working well for me,” said DeChambeau, who has, as is well known by now, added 40 pounds over the past year in order to add distance. “I was driving it well. My iron play was impeccable. When I got into trouble, wasn’t able to get out of it as well today as yesterday, but when I was in the fairway, I was able to attack and take advantage, and finished really well today.

Patrick Reed and Winged Foot fought to a draw.

Jason Kokrak, at one under, was the only other player under par for the tournament. For the day, only DeChambeau, Hideki Matsuyama and Bubba Watson broke par 70, one day after 21 players did.

Also making the cut were Jon Rahm, who is one over for the tournament, Dustin Johnson, who is three over; and Rory McIlroy, who is also three over.

Tiger Woods, Phil Mickelson and Jordan Spieth were among the players to miss the cut.

Woods made two birdies, including one on his last hole, but made five bogeys, including four over a five-hole stretch on the front nine, and one double bogey on his way to a seven-over 77 and a 10-over total. Mickelson made one just birdie and five bogeys for a four-over 74 and a 13-over total; and Spieth shot 40-41 and ended up with an 11-over total.