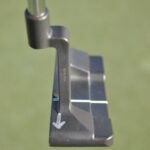 The arrow on Finau's putter was added by Ping Tour rep Kenton Oates.

Take a closer look at Tony Finau’s Ping PLD Anser 2D putter and you’ll notice a few interesting additions to the head that were added post-production. They aren’t modifications you’d be able to find on any website, which makes them even more interesting.

There’s a small silver dash in the recessed area of the topline that was added with a permanent marker, but most probably notice the silver arrow on the heel before the dash. The curious location makes it a conversation point when Finau’s on Tour.

“I’ve had guys come up and ask me about it,” Finau said. “But there really isn’t anything special going on there. It’s just something I added to help me during my setup.”

Alignment aids are a common sight at every level of golf. Most, however, are added by the manufacturer during the creation process and serve a valuable purpose as the golfer attempts to zero-in on their line and make center-face contact.

Of course, some golfers need something a little different to get in the right frame of mind when they stand over a putt. When Jim Furyk plucked a second-hand Yes! Sophia putter from a Massachusetts golf shop in 2010 — the same putter that helped him with the Tour Championship that season — it was partly due to a well-positioned nick in the topline that helped him line up putts.

The arrow on Finau’s putter, which was added by Ping Tour rep Kenton Oates, serves a similar purpose when the 2-time Tour winner addresses the ball.

Instead of simply relying on his eyes to tell him if the putter face is square at address, Finau also takes a look at the arrow to determine if he needs to make a slight adjustment.

“I know if the arrow is too close to my right foot, my face is too closed,” Finau said. “If it’s too close to my left foot, it’s too open. I try to get that arrow in between my feet and I know the putter is pretty square there. The line is a component for where my hands are to ensure they aren’t too high or low. I think a huge part of putting is putting the putter in the same spot each time — and those two lines do just that.”

Some golfers might think Finau’s arrow reminder is elementary, but if one of the best golfers on the planet is using a rudimentary arrow to determine if his face is square, maybe we should all reconsider our process for lining up putts.