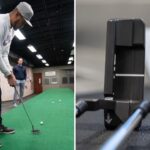 Tony Finau’s win at last year’s Northern Trust Open was significant. The obvious storyline was the five-year winless drought he broke in New Jersey, but the victory was equally important for Ping, who saw Finau close out the win with a club that put the equipment manufacturer on the map: the putter.

Prior to Finau’s multi-year deal in 2018, Ping required staffers to play one of the company’s putters as part of the endorsement deal. The foundation of Ping’s legacy was built on one of the most important putter designs in the history of the game.

Few, if any, balked at the requirement.

Then along came Finau to shake things up. To be clear, the 32-year-old didn’t pressure Ping into changing their equipment requirements. It was Ping’s former head of Tour, Chance Cozby, along with the Solheims, who saw an opportunity to think outside the box. At the time Ping was courting Finau, in 2017, his putter of choice was a Piretti — and he didn’t have any interest in changing.

Instead of pushing for Finau to conform, Ping signed him to a deal sans putter with the hopes of getting him into one of their flatsticks down the road. With Ping senior designer engineer Tony Serrano leading the way, Finau finally found himself wielding an Anser 2D with near-immediate success at last year’s 3M Open.

Fast forward another month and Finau was hoisting hardware in New Jersey. Success came quickly for Finau with a Ping putter in his hands.

“We’d been doing a ton of work with him,” Serrano told GOLF.com. “To see him win that week was validating, especially after the strong start he had with the putter.”

It’s a guarantee Finau will have a Ping putter in the bag this week as he prepares to restart the season at the Sentry Tournament of Champions.

The specific model, however, is still TBD.

Prior to departing the mainland for some downtime on O’ahu with his ohana, Finau made a quick trip to Ping’s headquarters to work with Serrano on a new putter.

The putter testing session was put in motion after Finau received a new Garsen grip with his foundation’s logo and colors (green) at the Houston Open. Instead of simply asking Ping’s Tour team to replace his current Garsen grip with the fresh handle, Finau requested that Serrano build him a new putter with the grip to see how it stacked up against his gamer.

“Tony is really particular about his putter, and that one’s been working for him,” Serrano said. “He didn’t want to change any variables. So we built him an identical putter for him to test that had the new grip.”

When Finau arrived in Phoenix, he headed straight for Ping’s indoor putting lab to make sure the numbers checked out. From there, he moved outdoors to the practice green to make sure the indoor session wasn’t an anomaly.

“We probably spent about two hours working on the putter,” Serrano said. “When we went outdoors, he was working on everything — long putts, short putts, breaking putts. It was important for him to know the new putter was doing everything the same.”

Everything checked out, but something was amiss with the sound at impact.

“Tony told me he heard something different at impact,” said Serrano. “The lofts were the same, but something still didn’t match up to his ear. After some discussions with Tony, I reduced the loft on the putter from 4 degrees to 2.5 degrees. Tony wasn’t sure if the sound was good or bad initially — it was just different. Everything looked good initially, but once we reduced the loft, it was more consistent with the way it was rolling. It sounded better to him, too.”

It’s important to point out how significant 2.5 degrees of loft is for Finau, who has continued to get his hands in a more neutral position — thus eliminating a pronounced forward press — in recent years. (To put the loft into perspective, Finau was at 5 degrees at one point when he was using a Piretti.)

Along with making a loft adjustment, Serrano made a minor modification to the new PLD head, milling a line in the recessed area of the topline. It’s an uncommon location for an alignment aid, to be clear, but adding it to Finau’s putter made it easier for him to ensure his hands and eyes are in the proper position at address before starting the stroke.

It’s a small change that’s produced real results for Finau since he made the switch to a Ping putter.

“When he sees the line fully disappear underneath the hosel, he knows he’s in a good position to go,” Serrano said. “With his gamer, he actually drew the line on there with a permanent marker and added an arrow on the heel section to act as an alignment aid. I just decided to add a perpendicular line on there to make it a permanent feature.”

The session produced plenty of positives for Finau, who opted to leave Phoenix with both putters for additional testing. Normally having multiple wands in the bag is a sign of indecision — unless you’re Adam Scott — but in Finau’s case, it’s more about figuring out which one feels better in his hands on the greens at Kapalua.

Having two viable options on the greens is always a good problem to have.