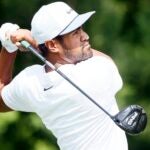 The relationship between distance and ball speed can vary slightly, but it’s safe to assume that every mile per hour increase in ball speed will net roughly 2 yards of additional carry. Taking those numbers into account, Tony Finau is leaving roughly 52 yards in the tank whenever he tees it up on the PGA Tour.

If math wasn’t your strength in school — join the club — that comes out to 26 mph of ball speed. Ball speed. It’s a number that sounds absolutely preposterous, especially when you consider Finau ranked 28th on Tour last season in ball speed at 177.91 mph. Compared to ball speed leader Cameron Champ (190.94 mph), he’s more than 13 yards off the pace.

While the ball speed average only takes into account valid radar measurements on par 4s and par 5s, it’s safe to say Finau is fast — but he isn’t that fast. Or at least that’s what the numbers say.

According to Ping Tour rep Kenton Oates, Finau has a gear that he rarely if ever shows in competition. While speaking to GOLF’s Fully Equipped podcast, Oates recalled a recent conversation with Finau at the Houston Open about a speed training session he’d gone through recently that netted him a ball speed number few on the planet can produce.

“I was talking with him on the range [in Houston] and he was hitting a [Ping G425 LST] with 180 mph ball speed,” said Oates. “Then he tells me he was at a speed training session in Utah and got 206 mph ball speed on his 12th ball. It’s insane.

During an interview last year with GOLF’s Subpar, Finau revealed he’d bet on himself in a long drive contest against the likes of Champ, Bryson DeChambeau and Rory McIlroy.

“I do think if you just get us on a driving range and give each of us five golf balls and see who can get it the furthest, I’d have a hard time believing someone can get it further than me,” Finau said.

Of course, the Tour isn’t a long drive contest, and Finau is realistic about what it takes to win at the top rung of professional golf. While distance can give you an edge over the competition — look at Bryson’s incredible transformation — losing accuracy and gaining ball speed in the process feels like a zero-sum game.

“I think the reason he continues to stay at 180 to 185 is that he’s so straight off the tee,” Oates said. “Tony’s always been long. I’ve heard stories of him being even longer as a kid — like 215s in ball speed. For him, he became a really good player when he honed it in. In the back of his mind, he knows if he’s at 180 to 185 and only curving it 2 yards, he’s going to be a really, really good player.

“He doesn’t hit it that far offline [at the higher speeds] compared to a normal golfer, but it’s different in PGA Tour terms.”

As one of the most consistent (and longest) drivers of the golf ball on Tour, Tony Finau isn’t hurting for an edge. But if he ever needs to unleash a gargantuan drive, at least he knows he has it in the tank — and then some.