Pre-round fashion? Tony Finau is trying to bring an NBA trend to the PGA Tour 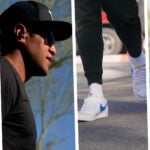 PACIFIC PALISADES, Calif. — Tony Finau has been thinking a lot about what he’ll wear to Riviera Country Club on Friday. Not the clothes he’ll compete in at the Genesis Invitational, but rather the clothes he’ll arrive in. Shoes, socks, shirt. Handbag, headphones, any other accessories. That’s the requisite concern, it seems, to become a golf trendsetter.

When Finau walks in from the player parking lot Friday morning, PGA Tour videographers will be on him from the moment he opens his car door. They’ll take note of his sneakers, zoom in tight on his necklace, pan with him as he struts by. And then 30 seconds later he’ll enter the clubhouse and become Finau the golfer once again. This is all his creation, by the way, in hopes of bringing the craze of pre-game outfits made popular by other sports to the golf world, one set of Jordans at a time. Finau Fresh is what he’s calling it, another way in which he can show off his personality, his hobbies, and maybe convince a couple other pros to do so alongside him.

“No matter what people thought about it, this is how I roll,” Finau said earlier this week. “This is what I like to do. I’m very comfortable doing something like this, dressing like this going to a golf course because when I’m not playing tournament golf, I pretty much dress just like a basketball player.”

As we saw two weeks ago in the Finau Fresh debut at Torrey Pines, he is not a man who fancies button-downs. Instead, we’ll be seeing some glamour with his late-tee time arrivals. Air Force Ones and mid-cut socks. A designer blazer paired with dress shorts. Things you’d see on GQ.com much more than GOLF.com.

“You even just saw Joe Burrow wear that super nice tiger suit to the Super Bowl,” Finau said of his inspirations. “It’s kind of just adding your flair to your pregame ‘fits.”

This week Finau’s outfit will include an homage to Kobe Bryant, the late basketball legend who spent his entire career in Los Angeles. As far as specific details, he stated the obvious: You’ll have to check back in Friday to find out.

On the whole, Finau’s idea is simple in nature. Craft a look, show up, strut through the parking lot. He admitted he’s been thinking about making this a staple for years, but was somewhat afraid to make the plunge. But NBA players have been targeting their fashionable entrances for decades. It’s a constant conversation in their locker rooms. There are Instagram accounts with hundreds of thousands of followers devoted entirely to pregame NBA outfits. Pro golfers? They dress for the day in their hotel rooms and sometimes head straight to the practice range.

“There’s no question I was nervous,” Finau says. “You know, I’m not super comfortable walking in front of cameras without a golf club in my hands. It’s a little awkward. I think that’s why it’s taken the time that it has from when it was kind of rooted in my head to now having it come to fruition.

“The biggest thing I think is just getting over that initial fear of what people might think and just be you. At the end of the day, that’s all it was. My wife got me over the top. She believes that I’m someone that could pull it off.”

Finau’s wife Alayna obviously helps with pep talks and, if he’s being fair, probably has as much final outfit influence as he does. But like most pros who visualize their routines, Finau wouldn’t want his Friday to look any different on paper — he just hopes it looks good on Instagram. He coordinates with the Tour content team so they know when he’s pulling up. He walks in, they record it — he’s improving his strut, by the way — and then it’s up to them to get to work. About an hour after his arrival, the edit is cued up to some original music and the post is sent out while Finau bangs golf balls on the driving range. If any other player wants the same treatment, all they need to do is ask. Finau wants Brooks Koepka to join in on the action, or anyone really.

The response has been good thus far, Finau thinks, and he genuinely hopes it catches on. But if not, so be it. This is more about showing off who he is than anything else. But for the fans who want more of this content, the key to it all actually lies on the golf course. These outfits and the corresponding content will keep showing up every time Finau has a late tee time. You’re guaranteed one of those each start, either Thursday or Friday. The better you play, the later the tee times get on the weekend. More contention, more content, more ‘Finau Fresh’ fits.