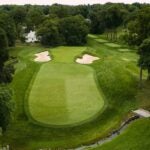 Winged Foot hosts its sixth U.S. Open this week, putting it on par with Oakland Hills and Pebble Beach in that department. Only two clubs — Oakmont (nine) and Baltusrol (seven) — have hosted the national championship more often. The Olympic Club and Shinnecock Hills are one behind, with five. Is it the ultimate U.S. Open venue? Where do you rate it compared to other prolific U.S. Open host sites, in terms of the quality of its design, the richness of its history and the fierceness and fairness of the test?

Steve Lapper (panelist since 2009; has played 84 of the World Top 100): Winged Foot may well be the world’s best course built on an unexciting, almost bland piece of ground. Lacking the links-style land of Shinnecock Hills or Pebble Beach, A.W. Tillinghast routed 18 wonderful holes with world-class, push-up style greens into the topography, doing so in a seamless, almost natural, fashion. Unlike Baltusrol, Oakland Hills, or the Olympic Club, “The Foot” doesn’t rely on a smaller subset of stretches to provide interest or strategic attention. It’s vastly more interesting than those three venues, with considerably better sets of par 3s and par 4s. Only Oakmont holds a candle to the kind of strategic balance and test for an Open on a non-seaside setting.

At the end of a round on the West Course, I usually feel like I just boxed Mike Tyson.

The majority of holes possess a mix of subtle angles, which place a premium on highly accurate driving. Find the wrong side of a fairway, or the deep, thick rough, and even most Tour pros won’t be able to get anywhere near the pin. Every green out there has serious movement, most with a healthy back-to-front tilt, and sloping shoulder wings that either feed, or reject, the ball to different quadrants. The course doesn’t rely on deception or excessive hazards to defend itself. Firm fairways, gnarly rough, and treacherous greens are enough. It’s a stern-yet-fair test of every club and nerve any golfer has. The last groups on a U.S. Open Sunday here feel like both Pinball Wizards and finalists from the Survivor. Other courses may have had more Open reps than Winged Foot, but only Oakmont resides on the same plateau.

Michael Pelliccione (panelist since 2020; has played 60 of the World Top 100): Mr. Lapper is correct. Winged Foot illustrates the brilliance of Tillinghast, who managed to create a marvelous golf course on what is a relatively flat piece of property. The strength of the course comes from its ultra-demanding, back-to-front sloping putting surfaces. It provides the toughest examination without needing wind, numerous hazards or excessive green speeds. For the world’s elite players, it is probably the fairest test of driving distance, shot shaping, recovery and putting. Writing about Winged Foot, Doug Smith perfectly described what separates it from other classic U.S. Open designs: it’s more strategic than it is penal. It is more strategic in that it offers you many shot options to achieve a solid score as long as you manage to keep your ball in play. Most of the other venues penalize you if you don’t take the direct/required line.

When it comes to rich histories, the courses listed above sit on the Mount Rushmore of U.S. Open venues. It would be almost unfair to crown one as the favorite. We’d also be remiss not to mention the likes of Merion (five Opens), Pinehurst No. 2 (three) and The Country Club (three).

This is a TOUGH one and I’m sure to upset a few with my response. While all the aforementioned venues provide suburb tests of the world’s best, the one that stands out to me in that regard is Oakmont, which could host a U.S. Open tomorrow, if necessary. The course needs no preparation, no growing of the rough, pinching of the fairways or baking out the greens. Everything at Oakmont is already laid out in front of you. It’s extremely demanding off the tee, with demanding bunkering and greens speeds exceeding well over 15 on the stimp. BUT it’s fair! There is no letup from the 1st tee to the 18th green. It’s not a fluke that all but one of its past winners are currently in the World Golf Hall of Fame.

Jeff Lewis (long-time panelist; has played 97 of World Top 100): The last four U.S. Opens at Shinnecock were won with +1, E, -1 and -4 totals. Certainly no pushover! The last three at Winged Foot were +5, -4 and +7. I am a pretty mediocre 5-index golfer who can usually drive the ball pretty straight. I find Shinnecock manageable, and usually shoot scores in my general range there. At the end of a round on the West Course, however, I usually feel like I just boxed Mike Tyson. There is an unrelenting quality to the golf course. Maybe only Oakmont, of the ones mentioned above, really compares in difficulty. Why is it so difficult? Because none of us have the self-control to shoot for the front edge of every green on the golf course — to Billy Casper-ize the place and take all of those impossible up-and-downs out of the picture.

I heard a story from Phil Young, a Tillinghast scholar, a few years ago. He said the current set of imposing greens on the West Course were the second set built by Tillinghast because the members rejected the first set as not challenging enough. Well, I am certain nobody has that complaint about this set! Winged Foot is probably the best golf club in the country, when one balances the quality of the two courses, the history and the variety. What a place.