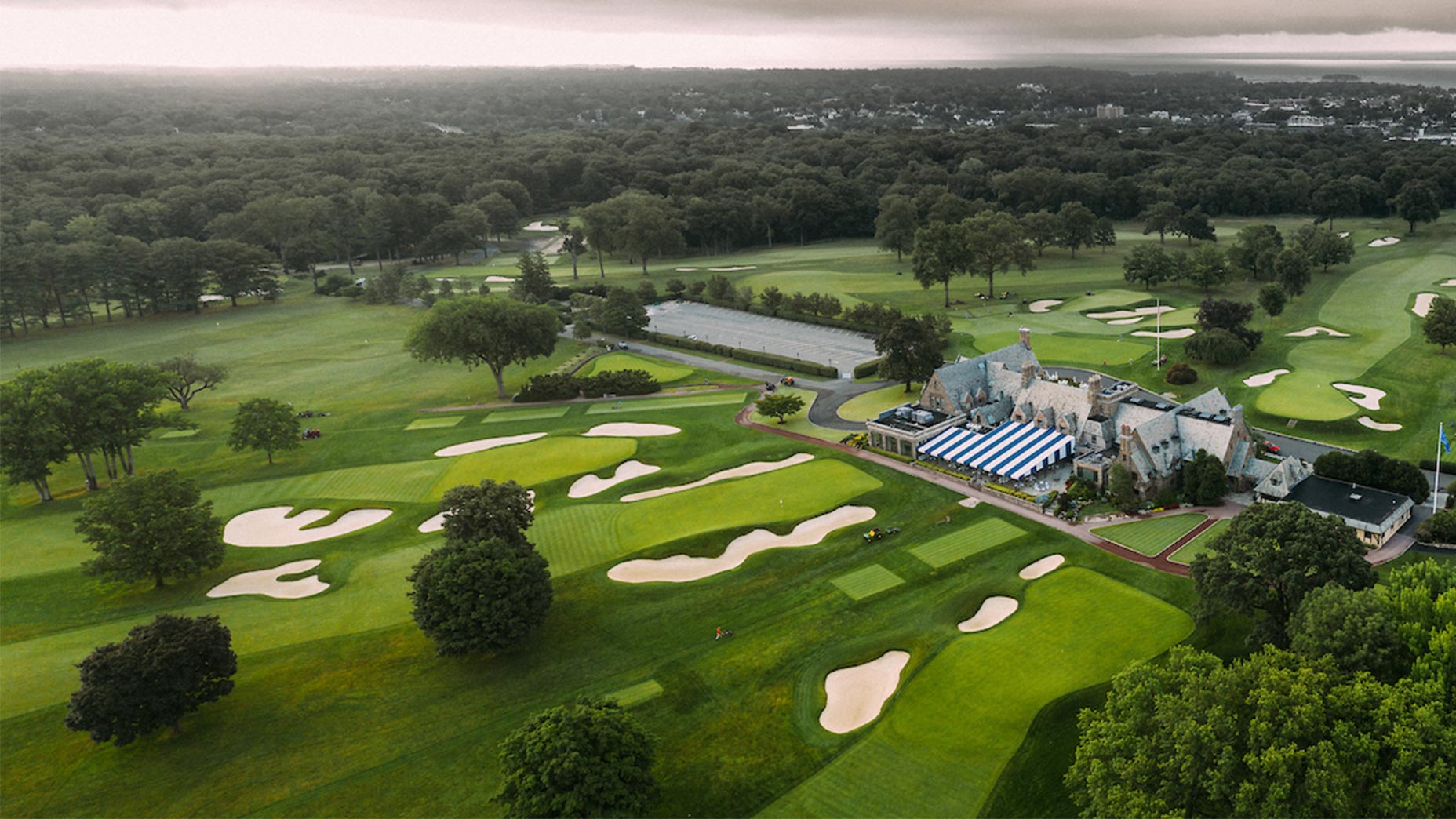 Only a handful of host courses in the United States can match the aura of our national championship. Think Shinnecock. Oakmont. Pebble. Pinehurst No. 2. Like those masterpieces, Winged Foot Golf Club is a dreamscape.

When the U.S. Open takes place there this week, we’ll be awed by the skills of the game’s best, but even more so by the fabled, 97-year-old club, so mythic yet still so mysterious to golf fans.

Now it’s back — as in way back. Seven years ago, club execs hired Gil Hanse to adapt to the modern game the original 1923 stylings and strategies of A.W. Tillinghast’s West and East courses. Hanse is overly modest about his effort and that of his brilliant restoration team, which in this case included design partner Jim Wagner and Steve Rabideau, Winged Foot’s tireless director of golf courses.

“My biggest hope is that our work is an authentic response to what was already there,” Hanse says, nodding to Tillinghast’s justifiably revered creations. In fact, he insists that his name should barely be mentioned in descriptions of Winged Foot’s West Course, the venue for this year’s Open.

Regardless of who gets credit, what remains is the magnificent playing surface. Hanse was so pleased by the work, he agreed to walk GOLF through the West’s full routing, breaking down the charm and treachery — and history — the pros will face. Get ready to take flight.

HANSE: “Traditionally, No. 1 is the most difficult green on the golf course. Welcome to Winged Foot, indeed. In the past, because of its contours, they’ve had to keep the green slower on the Stimpmeter. For our work, we looked at a lot of old photos of the green to restore ridges and ‘flat spots’ so we could find a few more hole locations.”

“On the second, we shifted the left-hand fairway bunker downrange to get it a bit more in play for the way these guys are hitting it. Although, after watching Bryson recently, I’m not sure that even now it’s in play! The green itself has one of the few remaining iconic elms on property, and that’s the lasting image of this hole — that tree overhanging the green.”

“When Billy Casper won the U.S. Open here in the ’50s, he intentionally hit it short all four days, just to avoid getting out of position. And he got up-and-down all four days. That tells you about the severity of the green. In this era of swashbuckling, go-for-it play, it will be interesting to see how they go after it. ‘Pinnacle’ is the perfect name, since this is the highest point on the West Course.”

“This will be a very different golf hole from what they played in the Open in 2006. There’s going to be a huge premium in hitting the fairway, with bunkers both left and right. And to be honest, at Winged Foot players will prefer the fairway bunkers to the rough. Then you’re playing to the far corner of the property, to a smallish but, actually, one of the more benign greens.”

“This will play 500-plus yards, and it’s a dogleg-left, but the fairway slopes right, so it plays narrower than it looks. It will favor a draw off the tee. The green had bunkers in front, guarding it as a par 5 [which is how the members play it], but now as a par 4, we restored the opening on the left side of the green so you can run the ball up into it.”

“A short but dangerous par 4. I’m curious to see how the pros attack it. We removed the left greenside bunker, which, visually, makes it more appealing to take a rip at the green. But it may actually be more dangerous, with long rough now replacing the bunker. Plus, there’s a creek lurking long off the green, and that might come more into play.”

“This is the shortest par 3 on the golf course, but with a severe green propped up and bunkers all around. It’s just such a hard target to hit. It’s a tricky hole to figure out what the wind is doing, because there are enough trees to shelter you and give you a very different feel than what the wind might actually be doing. This is a real challenge.”

[The 8th] is probably one of the hardest holes on the course. It can look nondescript at first, but it’s just a sneaky-good golf hole. Gil Hanse

“This is probably one of the hardest holes on the course. It can look nondescript at first, but it’s just a sneaky-good golf hole. You have to really shape your tee shot. There’s deadly rough down the left and some large trees down the right that are significant hazards. Green expansion has just made things more interesting and given the USGA more setup options.”

“Here’s our first par 5 of the championship, and it’s going to typically play into the wind. But there’s enough of an opening in the front that someone could sneak one up there in two. The green itself is really receptive to a wedge for guys who have to lay up, and it has contours that separate it into greens within the green and really reward precision.”

“Hogan called this ‘a 3-iron into some guy’s bedroom.’ We wanted to lengthen it about 30 yards, so guys would have a mid- to long-iron in. I hate the word ‘iconic,’ but this is one of the most recognizable par 3s ever created, in the way that it sits up on that landform. It’s such a good hole.”

“This is another shorter, positional par 4. We thought about moving the bunkers downrange but ended up leaving them because, like with No. 6, you want to create temptation to thread one in there, not just force a layup. We added a couple of pin positions, too, so this hole has a lot of flexibility in its setup.”

“It’s safe to call this a true three-shot par 5. Some guys who hit the fairway will try flying something over the trees, but that comes with risk. The shared fairway bunkers between 12 and 17 come into play. Do you lay up short of them? Cozy up to them? Try to fly them? On the green, check out the back pin—that’s the most treacherous spot.”

“One of my favorite holes on the course, because check out the green complex — it’s phenomenal. When we did little stuff here — expanding the green, showing off the rolls on the edges, restoring the bunkers — the entire thing just jumped out of the group and popped out of the landscape. It just has so much character.”

“This was probably our biggest change. We moved the bunkers downrange, so they should be in play off the tee. We looked at original design photos and saw a three-lobe shamrock green, so we restored it and added a false front. Then we added bunkers in the approach — 20, 30 yards short of the green. It’s counterintuitive, but expanding the green and moving the bunkers back made the hole more difficult.”

“If you want to push the advantage off the tee, you have to really be precise, but you can get rewarded with a shorter approach. Putting a premium on that short-iron shot forces players into a big decision off the tee that they didn’t have in the past. Then we made a significant green expansion, with major undulations and a big, dramatic backboard. You’ll need to get to the right portion of this green.”

“The members play this as a par 5. It’s critical to find the narrow fairway because guys are going to have mid- or long-irons coming in, and it’s tough to find these greens from the rough. Also, the left side is guarded by trees all the way down. Hit it in the left rough? Good luck.”

“That spot where [eventual winner] Geoff Ogilvy chipped in in 2006? That’s green now. One of the critical things you’ll see is the expanded greens didn’t all yield new pin locations. Tillinghast wanted these severe slopes to be part of the challenge but then also to be opportunities for recovery. Backboards, funnels, right sides, wrong sides — this green has got a ton of character.”

“The 18th has all the elements you could want. It has scuttled the chances of so many great players. There are plenty of trees, which loom larger with 18th-hole pressure. And we’ve restored a big false front to the green, which begins this effect of a staircase up to the clubhouse. The entire course builds toward this crescendo. It’s just a really fantastic and fitting finish.”