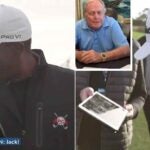 Kevin Hall had a message from an 18-time major champ earlier this week.

Kevin Hall was going about a typical Pebble Beach practice round when he was stopped and shown an iPad. It was Jack Nicklaus.

Hall, who is 38 and has been deaf since the age of 2, has three wins in the last four years on the APGA Tour. He got into this week’s AT&T Pebble Beach Pro-Am on a sponsor’s exemption, and it’s his seventh career PGA Tour start.

He’s yet to make a cut on the PGA Tour, but during a practice round this week he got some motivation. The former Ohio State standout got a message from another Buckeye. Hall was shown a message recorded from Nicklaus, who had quite the track record at Pebble. He won a U.S. Amateur there, three Crosby Pro-Ams, two Shell matches and the 1972 U.S. Open. He also designed the current 5th hole.

Nicklaus has long said if he could only pick one more round to play, it would be at Pebble Beach.

“I love the place,” he told Hall. “It’s not a hard golf course, Kevin — it’s just a demanding golf course.”

Nicklaus told Hall that every green will break toward the Pacific Ocean and gave him a few more tips.

“Kevin, we want to wish you well, play well,” Nicklaus said. “I know you’ve played a few tournaments on the Tour, you haven’t made a cut yet, but by gosh, you’re going to make it this week at Pebble.”

“I wasn’t expecting it,” he said. “He’s somewhere in Florida, wherever he is, and he’s talking to me and thinking about me. Go Bucks. We all take care of each other.”

Hall shot a one-over 73 at Pebble Beach on Thursday, leaving him in a tie for 97th, so he’ll have some work to do to make the cut. Follow along with his second round here, and check out Nicklaus’ video below.

(Nicklaus Companies and GOLF.com are operated by the same holding company, 8AM Golf.)