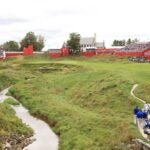 Whistling Straits is once again in the spotlight this week as it serves as the venue for one of the most exciting events in golf.

The Ryder Cup is finally here. After three long years, the premier team event in men’s golf will pit the best from America and Europe as they vie for custody of the coveted Cup for the next two years. Wisconsin’s Whistling Straits is once again in the spotlight this week as it serves as the venue for one of the most exciting events in golf. Here are five things to know about the iconic host venue.

Whistling Straits is a sight to behold on the coast of Lake Michigan, but before the masterpiece was ever created, the course was a relatively ordinary piece of land. In the 1950s the land was used by the U.S. Army for an antiaircraft training facility called Camp Haven, and before that it was just flat farmland. After the Army was done using the land, it became a makeshift garbage dump until Kohler Co. bought the property in 1995.

When the legendary Herb Kohler purchased the property in the 90s, he had big plans for the plot of land. He wanted a golf course capable of hosting big-time tournaments, and he knew just the designer for the job — Pete Dye. The course took over four years to build and when it opened in 1998, the result was a championship-caliber course ready for the big stage.

Six years after its founding, Whistling Straits made its debut on the big stage as the PGA Championship was contested in August of 2004. Vijay Singh won in a playoff that week, and the PGA has returned twice in the time since as Martin Kaymer won in 2010, while Jason Day claimed the Wanamaker Trophy in 2015. The U.S. Senior Open was also hosted at Whistling Straits in 2006, with Brad Bryant emerging victorious. This will be the first time the course has hosted the Ryder Cup.

Whether you watch the Ryder Cup on TV or you’re lucky enough to score tickets to the event, you’ll almost certainly be struck by the number of bunkers on the course. Sand comes into play on nearly every shot on the property, and if players aren’t careful, these traps can spell doom for their scores. (Dustin Johnson in 2010, anyone?) But while these hazards are a staple of Whistling Straits, no one knows the exact number of bunkers on the course. Course officials have tried to get a definitive count over the years, but for now, the best they can do is “over 1,000.”

Whistling Straits has plenty of teeth on its design, but the closing four holes might be its toughest test. Starting with the par-4 15th, the closing stretch is demanding as they come. With two par-4s measuring over 500 yards, a par-3 stretching to 220, and a risk-reward par-5, the closing quartet should provide for some fireworks to close matches at the Ryder Cup.