What’s wrong with ‘target golf’? And what are its alternatives? 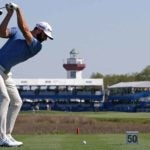 Harbour Town Golf Links has been criticized for promoting "target golf," here's what that means.

Welcome to A Beginner’s Guide to Golf Course Design, where we’ll dig into the history, design and meaning of golf course architecture terms you’ve probably heard before but might not fully understand. We’ll explain all of the above in an accessible Q&A format, and better yet, teach you how to identify these features and plan your attack for the next time you see one, saving you strokes along the way. In this installment, we’re breaking down target golf and its alternatives.

Shouldn’t I be picking a target for every shot?

The short answer is, yes, of course. Every time you make a swing there should be an exact spot you are trying to land the ball, but that isn’t quite what we mean by target golf. Target golf means the ball will likely come to rest approximately where it hits the ground. All of the strategy takes place aerially. Much of the golf in America is classified as “target golf.” PGA Tour golf often fits under the description for “target golf” due to soft course conditions and highly skilled players.

The combination of the average PGA Tour player’s length and shot trajectory allows them to ignore the ground game. They hit the ball so far off the tee that they have short irons and wedges into greens, allowing them to easily control the spin. In essence, they can aim at the flag and hit it as close as possible, knowing it will quickly come to a stop.

However, course conditions facilitate much of this behavior. Slower courses mean the ball comes to a stop quicker, especially on the greens. Weather conditions also affect how long it makes sense to keep the ball in the air. In Scotland and Ireland, wind and other factors often force players to keep the ball closer to the ground.

Most experts agree that target golf requires less strategy than ground game. Target golf is often easier for good players since their ball will regularly stop close to where they aimed. At the same time, it can be harder for higher-handicappers as slow conditions mean the ball won’t travel as far.

So, should I only use a putter?

While that might be a fun challenge, you should aim to keep the ball off the ground. Like everything else in golf, variety is key. It’s good to play some holes that require you to play target golf, but not too many. Having ground game usually adds extra options to holes, adding more fun and strategy.

To explain ground game, let’s look at three areas where it often comes into play: tee shots, approach shots, and recovery shots around the green.

You might think “tee it high and let it fly” absolves you of considering the ground, but the best courses make you think about the ground contours on every shot. Considering what a tee shot will do after it lands is one aspect of the ground game. If a fairway is firm, then picking the correct shot shape, line and height can all affect whether the shot is a success or not. A draw on the right line might allow the ball to take an extra slope for added yardage or a better angle. Or even scarier, if the contours aren’t considered correctly, a shot you thought was great might catch a hill and roll out of the fairway or into a bunker. With wet conditions, the ball will often barely move from where it lands, but with interesting contours and a firm fairway, the ground can be used to your advantage.

The ground game has a similar concept on greens. Using the contours of the green to get the ball as close as possible to the flag is common in the U.S. Think of a redan par-3. If the green is firm, aiming right at the flag will make the ball run off the back of the green. The smarter play is to try to use the undulations near the front of the green to feed the ball back toward the hole.

The final place you’ll see ground game is around the green. Many instructors recommend getting the ball on the ground as soon as possible because there’s greater margin for error. Using contours around the green is typically much easier than the high-lofted shots we see the pros use on TV.

What’s the benefit to ground game?

Ground game is often connected with the word “imagination” — figuring out exactly where to land a ball and then pulling off that shot is one of golf’s great joys, especially as you watch your ball funnel closer and closer to the hole.

While it’s fun for the average player to see the ball along the ground, it is one of the scariest elements of the pro game. Once the ball hits the ground, the professional golfer is no longer in complete control. This is part of the reason you will see pros avoid the ground game when they can.

Of course, the ground game is only possible under the right course conditions. Ground game typically necessitates windy conditions, which is part of the reason it is seen more on links courses overseas.

One common part of the ground game we get to see during The Open Championship is run-up shots. If a green is firm enough, landing the ball short and letting it run up onto the green can be the only way to keep it there. Figuring out how to land an approach short so it rolls close to the flag is a task seldom asked of players in America, but is one of golf’s most entertaining shots.