What is a Redan hole, plus how identifying one can help your game

Welcome to A Beginner’s Guide to Golf Course Design, where we’ll dig into the history, design and meaning of golf course architecture terms you’ve probably heard before but might not fully understand. We’ll explain all of the above in an accessible Q&A format, and better yet, teach you how to identify these features and plan your attack for the next time you see one, saving you strokes along the way. In this installment, we’re breaking down Redan holes.

OK, first things first — the word Redan. What does it mean?

The term Redan originates from a French word for part of a fortification. It is an arrow or V-shaped embankment toward the expected point of attack. Redans were common features in Malta in the 17th and 18th centuries and the Russians later used the design in defense of Napoleon and the French.

Umm…what does that have to do with golf?

Redan golf holes are well defended, like the military fortification for which they’re named. The green is offset close to a 45-degree angle moving from right to left and is guarded on the front left by a large, deep bunker. Usually seen in its original par-3 form, the Redan often plays as a mid-length to long par-3 to force longer irons and lower trajectory shots. They can range anywhere from 170 to 240 yards.

Got it. Are there any other defining characteristics of a Redan green?

The green slopes from the front right to back left (or vice versa on a reverse Redan). A common identifying feature is a large shoulder or hump on the front right of the green to help funnel balls back. While there are many different versions of the Redan, the traditional one has the front bunker and a second one situated behind the shoulder to catch all long shots. The common pin positions on Redans are in the middle or back of the green. It’s a genius design because it forces players to aim away from the hole in order to get it close.

Who came up with the idea?

The par-3 15th at charming North Berwick, in Scotland, is credited as the original Redan (though no single architect has been credited for designing the hole). While the club was formally founded in 1832, golf had been played on the property since the early parts of the 17th century. It wasn’t until 1868 that the club acquired the land where the famous 15th hole would eventually sit. The two architects who most commonly employed the Redan template were C.B. Macdonald and Seth Raynor. Most golden-age architects made use of the design at one point or another, and the Redan is making a return with throwback architects such as Tom Doak and Coore & Crenshaw. 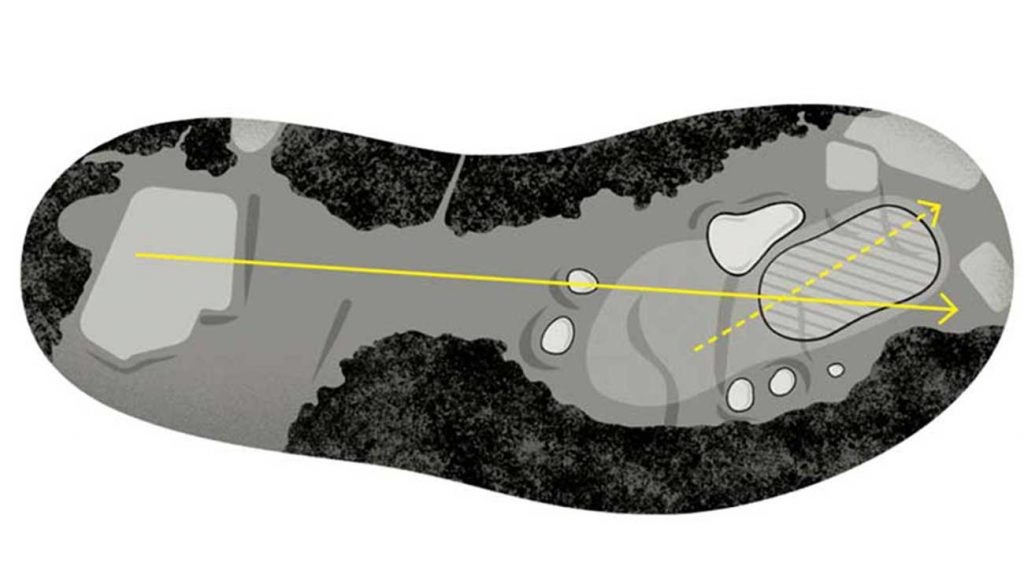 A diagram of a Redan hole.
BEN MOUNSEY-WOOD

OK, cool, so how best to proceed if I spot a Redan when I’m playing?

Knowing that a hole is a Redan can be a major strategic benefit for the weekend golfer. Playing target golf and aiming directly at a back or middle pin position is a great way to make a bogey, or worse. The front-to-back slope means shots will often jump over the back of the green, leaving a difficult up and down for par. If you can recognize the hole is a Redan from the tee, you can use the undulations to your advantage. 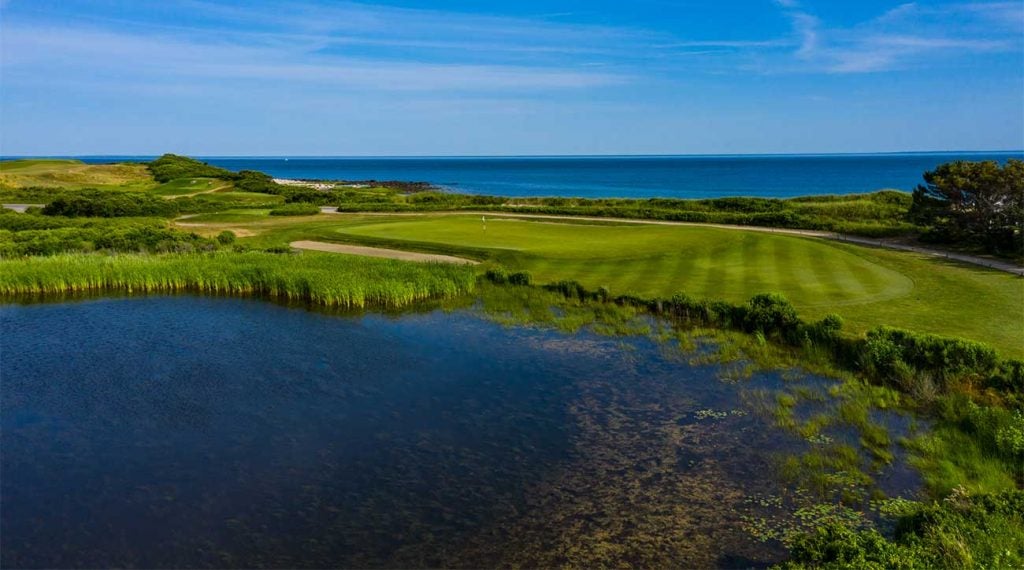 A view of the 2nd hole at Fishers Island in New York, which is a classic Redan.
LC Lambrecht

Sounds challenging. Anything else I should be aware of?

A big advantage of understanding golf course architecture is knowing the best place to miss. This is especially true of Redans. Leaving a ball short or in the front bunker forces a nearly impossible up and down — the green is sloping away from you, and you’d have an easier time stopping the ball on your dining room table. Missing in the back-right bunker forces the same problem. If you’re going to miss, miss long and left. That leaves the easiest chip back up to the hole.

Where can I see Redans on the PGA Tour?

There are few courses on the PGA Tour that feature template holes. There are also not many courses that play firm and fast enough for a Redan hole to play as intended. However, there are a few fantastic renditions that pros play every year.

The 17th hole at Waialae Country Club, home of the Sony Open, is a great example. The course has undergone some renovation work by Tom Doak in the past few years, including dialing up the 17th to fit what Raynor imagined for his template par-3. The other classic Redan on Tour is at The Old White TPC at The Greenbriar. The 8th hole at The Old White is the only place where pros see a Macdonald Redan on a yearly basis.

The 4th hole at Riviera is one of the tougher par-3s pros see all year, and it’s also a Redan. It plays long — 236 yards — and into the breeze, forcing players to reject the normal target golf and try to run balls up from the front. Ben Hogan called George Thomas’ 4th hole “the greatest par-3 hole in America.”

How about Redans at major venues? Does Augusta National have one?

Augusta does not, but the 7th hole at Shinnecock Hills (pictured below) is one of the world’s most legendary Redans. The hole didn’t make much noise at the 2018 U.S. Open, but at the infamous and over-baked 2004 U.S. Open, this Redan was deadly and led to mayhem for Phil Mickelson as he chased the career grand slam. The hole became so difficult the USGA was forced to water it between groups. (The U.S. Open returns to this great course — and hole — in 2026.)

Professionals will also face a glorious and difficult Redan at the 2023 U.S. Open at Los Angeles Country Club. The 244-yard par-3 11th plays downhill with an L.A. skyline backdrop. The beautiful George Thomas bunkering and undulating green will make this hole a difficult mid-round test for the entire field. 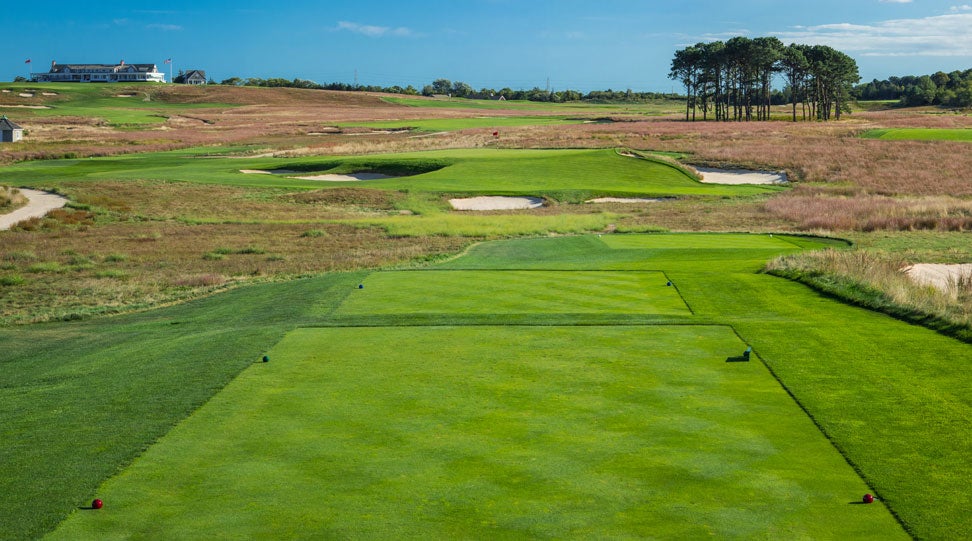 This has been super-helpful! How about a few parting words on some of the most famous Redans, so I can drop a little architecture knowledge on my golf buddies?

Sure thing. There are many examples. Here are five standouts:

No. 7 at Chicago Golf Club: The host of several U.S. Opens and the inaugural U.S. Senior Women’s Open in 2018, Chicago Golf Club is one of C.B Macdonald’s masterpieces. The geometric design and severity of the hole is striking. 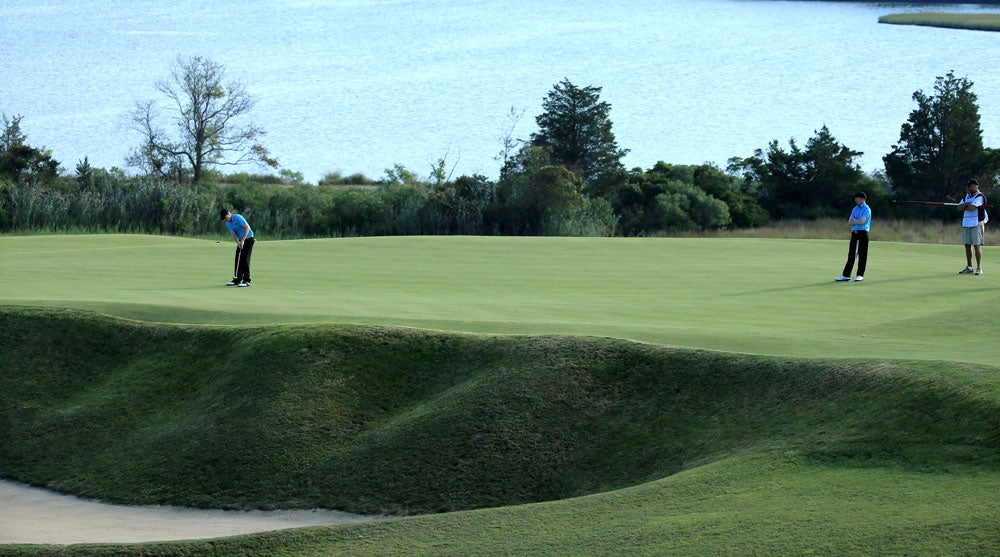 The 4th at National, where a deep bunker guards the front-left side of the green.
getty

No. 2 at Fishers Island: The 2nd at Fishers Island is a shorter Redan, but also has a forced carry over water to the green. The Seth Raynor design is one of his best, and although it’s no surprise that the 2nd hole is in a pristine location, it’s hard to find a spot at Fishers that isn’t majestic.

No. 13 at Yale: Another gorgeous Raynor Redan sits at The Course at Yale. Nestled into the Connecticut woods, the 213-yard downhill 13th is a prime example of how to inject strategy into a hole using deep bunkering and the classic front-to-back sloping green.

No. 4 at Essex County Club: Donald Ross has some fabulous Redans of his own. One of his best is the 4th at Essex County Club in Manchester-by-the-Sea. Essex has one of the best sets of par-3s on the planet, and the 4th is the first one players see during their rounds, immediately alerting them to the difficult test they’re in for.