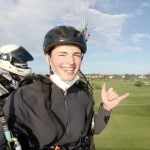 Yes, I did jump off a cliff in the name of golf journalism. Yes, I acted alone in this behavior — unprompted by supervisors or coworkers. And yes, I was reimbursed in full.

Long before Torrey Pines was home to one of the world’s most beloved municipal golf courses, it was home to the gliders.

The easiest description of gliding is, well, flying. Using only some fabric and the wind, individuals float high above the land, sashaying lazily through the air like small clouds. Gliders come in two primary forms: paragliders — in which the operator sits in a basket underneath a large parachute — or hanggliders — in which the operator ‘hangs’ suspended in the air from an aerodynamic chute designed like a paper airplane.

Benefitted by consistent easterly winds; high, jagged cliffs; and a steady dose of year-round sunlight, gliding quickly became San Diego’s adopted sport. In 1930, the locals officially christened Torrey Pines Gliderport, and not long after, the legendary Charles Lindbergh made the first-ever sailplane flight over the cliffs.

By the time William P. Bell got to designing a golf course on what remained of an abandoned Army base in the late-50s, Torrey Pines was a bonafide hub of aviation. In many ways, the course was an extension of the promise represented by the gliderport: a public good, operated by the public, for public consumption.

To the great fortune of the people of San Diego, that legacy has remained intact for the last century for both parks, even as names like Lindbergh and Woods and Rahm have made history on its turf. Today, the gliderport is a destination spot for thrill-seekers, while locals can play the South Course for $63 — $38 during twilight — on any given weekday.

Perhaps their proximity has something to do with it. The gliderport sits less than 1,000 feet from the 12th green at Torrey Pines South Course, but it’s hard to get within a mile of property without noticing its byproducts. On a clear, breezy day, the traffic over Torrey Pines rivals the traffic on it.

The gliders aren’t a nuisance, though. Far from it. They’re perhaps the South Course’s most charming quality, and for those of us stupid enough to try flying one, they provide something else entirely: a glimpse of what actually makes Torrey Pines great.

It’s hard to pinpoint the exact moment a dumb idea became an even dumber action, but it likely started around the time I reached the 15th hole at Torrey Pines South on April 27, 2021.

I should have been thrilled. It was Tuesday at Torrey Pines. I was in Southern California covering the USGA’s U.S. Open Preview Day with no responsibilities other than to play great golf for free. And yet I was distracted.

Preview Days are terrific, but they are, by definition, not unique. Every member of the media sees the same course playing the same way, hears the same stakeholders speak, tries the same halfway house snack and recreates the same famous shot. Then those same media members go home and write ostensibly the same story.

That’s all good fun, but as a 23-year-old with aspirations of continuing to visit beautiful golf courses for work, I felt a responsibility to find something different, so I broke one of golf’s cardinal rules. I made a phone call from the tee box.

“Torrey Pines Gliderport,” sung the woman on the other end of the line.

“Question for you,” I responded. “Is there any chance you’ll still be flying in about an hour?”

Come to think of it, maybe the first action of stupidity came 45 minutes later, when the front desk attendant at Torrey Pines Gliderport handed me an iPad and began filming.

“Okay, just read the script below for me nice and slow,” she said.

“My name is James Colgan and today is April 27th. I choose to participate in the sport of paragliding with the understanding it is an inherently dangerous sport which may result in injury, bodily harm or even death.”

Before I could question the necessity of such stringent liability measures, a stranger approached me.

“This your first time?” he asked, sensing my nerves.

He took off his sunglasses and looked me straight in the eye.

“There’s only one thing you need to know,” he said, winding up. “You need to be careful up there …”

As it turns out, jumping off a cliff is relatively easy. Convincing yourself to do it, on the other hand, is not.

So when my pilot, Mark, told me to sprint as fast as I could toward the cliff’s edge, I paused for a second.

Just as we reached the cliff’s edge, a gust of wind hit our parachute, jolting the two of us into the air.

Suddenly, we were flying.

“Like a bird, man!!!” Mark yelled again, steering us in the direction of the golf course.

The two of us rocketed over the cliffs, staring down at the ocean below as a pack of dolphins breached the waves. The feeling was euphoric — as if the whole world stopped to ride with you. Before long, the golf course came into view.

The late afternoon sun cast shadows over the fairways and greens, illuminating the contours I’d inspected from up close less than an hour earlier. Down below, a foursome enjoyed a picture-perfect emergency nine. They waved up to me, and I waved back.

Mark steered me further over the golf course, and we dipped just above the treetops and over the valleys.

An hour over the golf course felt like 10 minutes, but just as abruptly as we’d entered the sky, it was soon time to return to earth.

I FaceTimed my parents from the ground.

There is a lesson to be learned in enjoying Torrey Pines twice, but I’m afraid it has precious little to do with course design or architectural significance.

From the ground, Torrey Pines is like a lot of other places in golf — spectacular for a few moments, unspectacular in plenty of others. Its greens are bumpy, its bunkers are clumpy and firm, its fairways are not kept at a razor’s edge. Some blades of grass are not perfectly manicured, and no, the clubhouse is not anyone’s definition of ‘palatial.’

But from the sky, a very different picture comes into view, a picture without the preconceptions of a ‘major championship golf course.’ In its place, one finds a stretch of land with green grass and rolling terrain, 18 tee boxes and greens aligned in neat order, and dozens of strangers, united by nothing other than their passion for being in this place at this very moment.

From the sky, it doesn’t matter what Rees Jones did or didn’t do in his recent renovation to William Bell’s design. Nor does it matter whether the quality dips after the 4th tee box, or if the par-5 9th is long and straight enough to serve as an emergency runway for a 747.

Rather, it matters that Torrey Pines exists. It matters that you and I can enjoy this place in the same way Tiger Woods and Jack Nicklaus and Jon Rahm once did.  It matters that this place — with its imperfect golf and congested skies — continues to provide a glimpse of golf for what it actually was meant to be, and not for the many exclusionary things for which it was not.

Maybe all Torrey Pines needs is more people who are willing to take the 10,000-foot view.