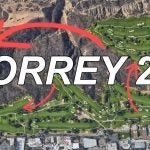 A more intriguing finish is available at Torrey Pines. It would take place on holes 2 through 6.

If you get the chance to play Torrey Pines, you absolutely should. The sticker price has some shock to it for non-locals— $200 for a municipal is no joke — but with it comes the chance to play shots the pros play, to play along the Pacific Ocean and to reminisce every January when the Farmers Insurance Open arrives on our televisions screens.

When you do play Torrey Pines’ South Course, you’ll understand why it feels like the perfect example of a course that is good, but not great (72 other public courses are ranked above it in our Top 100 Courses You Can Play). You might feel that it’s worthy of playing host to the PGA Tour, but perhaps not a major championship.

It was on my first visit to the South Course that I had no choice but to think about its design, and in particular its routing. It was August 2019 and Rees Jones was still reshaping the course in advance of this week’s U.S. Open. As a result, the 12th and 13th holes that run parallel to each other along the south end were off-limits, and our round would include just 16 holes. (As a result, we paid about half price, which felt fair.)

With the course a bit in flux, players were asked to start their rounds on the 7th hole, which runs north to south, instead of the 1st hole, which runs east to west and toward the Pacific Ocean. Why exactly, was Jones’ work on 12 and 13 making us start on 7? The reasoning wasn’t clear. But it did offer a much different look at the course, and a glimpse at how the course maybe should begin.

Editor’s Note: Is this proposal a harsh rerouting, by definition? Not really. The routing makes sense as is. There’s only so much you can do with the property. But the start and finish (and what that would mean for a professional tournament on TV) could be altered in a very simple way.

It all begins with the 7th hole becoming the 1st hole, just like the Parks and Recreation department for the city of San Diego intended for us back in 2019. Comparing the two holes — 1 and 7 — it’s clear that the latter has more spice to it. The dogleg right has a perfectly placed bunker along the left side of the fairway and an imposing set of trees that run up the right side of the hole that guard the more direct angle to the green.

What a great 1st hole that would be! The green itself is one of the trickiest at Torrey, with three distinct tiers from back to front. The 1st hole, on the other hand, is much more accessible from the fairway bunkers and the right rough. If we can make the U.S. Open begin with a thought-provoking tee shot. we’d all be better off for it.

No. 6 is a better finishing hole than 18

Torrey Pines’ 18th is afforded a lot of love because of what Tiger Woods did on it back in 2008. But it definitely doesn’t get the golf course architecture nerds excited. For starters, the water hazard shy of that green holds a distinct purpose: making players think about risk vs. reward, especially from the rough. But the hazard itself feels forced when you consider there is no other water hazard on the property. No, the Pacific Ocean doesn’t count. So sticking one there on 18 just feels a bit off.

The 18th is also the easiest hole on the property. In 2008, it played easier than any other hole, according to par. And at the Farmers, it plays as the second easiest hole because the 6th is played as a par-5. This week, the 6th is a par-4, and we’re all better off because it played as the 2nd-toughest hole in 2008. There are fairway bunkers and trees to the left, and much more trouble to the right. As a par-4, it’s a challenge. Which begs the question: Do we want the final hole of the course, and the final hole of the championship, to play as the easiest? Or inversely, should it be one of the toughest?

It’s a philosophical quandary for the USGA, but you’d be hard-pressed to find another instance where the easiest hole on the course was the finisher at a U.S. Open. (Chambers Bay doesn’t count as it was played as a par-4 during the 2nd round.) Do we want winning birdies or winning pars on the 72nd hole of what was recently known as Golf’s Greatest Test? Just food for thought. (Yes, they could just play it one tee up and make the 18th a par-4, but the 6th hole is still more imaginative than the rather straight 18th.)

There’s room for theater on the front nine

Part of what makes the Masters so great is that Augusta National folds up on itself a bit on the back nine, with holes 13, 14, 15 and 17 running alongside each other. Stuck there in the middle of it is the amazing 16th, in a valley where crescendos reign supreme.

Torrey Pines folds up on itself, too, but on the front nine. Holes 1-6 exist on their own little corner of the property while much of the back nine runs out and back. If a birdie is made on the 12th hole at Torrey Pines this week, they will not hear it on the 18th.

Beyond that, the best stretch of holes — for viewing purposes — is also that stretch on the front nine. The 2nd hole is the only one on property that can be squished into an excitable, drivable par-4, like it was on Sunday at the ’08 Open. Sunday’s 2nd hole played a full quarter of a stroke easier that year than Saturday, and saw the only eagle made on that hole all week. Wouldn’t that make for an exciting 14th hole? Or, if a birdie was made at the rerouted 17th (now the 5th), those leaders on the current 1st or 2nd hole would be right there to hear all about it.

The 4th hole is the most TV friendly…

…and it would make for a great 16th hole.

The 4th hole at Torrey Pines will get plenty of TV time this week. It’s the hole all the paragliders fly along, since it abuts the drop-off near the Pacific Ocean for the entirety of its 490 yards. It was one of the holes that Rees Jones focused on most during his recent renovation. It is one brutish, beautiful par-4 that requires a great drive and a great approach to avoid bogey.

In other words, what a great 16th hole! What a great 70th hole of a major championship! And when the sun sets on Torrey each night, that’s the hole caked in light. That’s the hole all the drone pilots love. For our purposes, back in 2019, it was the third-to-last hole we played, and it was quickly proven to be the most picturesque on the property. But this week, it will appear and exit our screens while the sun is still high in the sky.