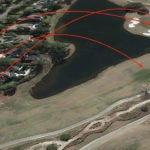 At the 5th at Belfair East, you can choose your own adventure.

A week before Covid-related air-travel restrictions were enacted, I snuck away with three friends — two from my New Jersey neighborhood, one from college — for two-and-a-half days of golf in and around Hilton Head Island, S.C. We shared carts, dined indoors and even shook hands at the completion of our rounds. Different times, man.

The first day was largely a gloomy washout; instead of knocking down flagsticks, we knocked down pins at the local lanes. Improved, if breezy, conditions greeted us on Day 2 — we kicked off the proceedings with 18 on the Pete Dye treasure at Harbour Town, followed by another 18 a half-hour north at the Arthur Hills course at Palmetto Hall — but it was our final round of the trip, on Day 3, that has most stuck with me.

More specifically, one hole from that round, the absurdly fun, risk-reward par-4 5th on Belfair’s East course.

Belfair is a sprawling gated community, 10 miles west of Hilton Head, in Bluffton, with a pair of Tom Fazio courses. The West course is the more renowned of the two; last year it played host to the PGA Professional Championship, from which the top-20 finishers earned a spot in the PGA Championship at Bethpage. But the East is no slouch, either. Belfair’s marketing materials tout the design as “reminiscent of the links courses of Scotland.” Nothing about it reminded me of the links courses of Scotland — it’s peppered with lagoons and pines and yawning bunkers filled with bright, white sand — but my pals and I still thoroughly enjoyed it.

I knew little about the course, so each hole was a surprise, none more than the candy-cane-shaped 5th. From the elevated middle tees, it stretched to about 310 yards, but, as the crow flies, the distance to the front edge of the green was more like 240 yards. The decision to take that route, though, is complicated by a water hazard that lines the left of the fairway and the front of the green. Two-forty is a meaty poke for most weekend hackers, but there’s a landing zone just in front of the green, so the carry to safety is actually closer to 205. And that’s what makes the hole so tantalizing: in my experience, 200 yards is the perfect carry distance to ask a mid-handicapper to fly — not to force them to, but to ask them to, should they be feeling bold.

The other option is to play down the fairway with anything from a 5-iron to driver, meaning, in essence, you have about seven or eight different ways to play the shot. The farther down the fairway you knock your drive, the less club, and better angle, you’ll have into the green.

The putting surface is large and protected by two front bunkers, and the placement of the cup can radically change the personality of the hole. A front-right flag, just beyond one of the bunkers, is difficult to access. A back-left pin is less protected but requires one or even two more clubs to get there.

I was the first in our group to hit and ripped driver. Let me rephrase that. I hit a wipey cut with my driver. For a glorious instant, I thought it had chance of survival. But as my ball began its descent, its fate quickly became apparent. Splash. I’ll spare you the details of my comrades’ efforts — one carried the water but found a bunker, another took the safe route up the fairway and I forget what the third did. But the tee shot gave everyone pause.

The 5th at Belfair East isn’t likely to inspire any love notes on GolfClubAltas.com; holes that don’t permit you to run the ball into the green have fallen out of vogue. Some might even decry it as “tricked up.” Not this guy! My criterium for a good hole is simple: a hole that sticks with you.

And I can’t shake No. 5 at Belfair. Or, for that matter, how I played it. After dunking my drive, I re-teed from the same spot, squeezed my driver grip hard, and drew back the club.

Game over. My next swing came on the 6th tee.