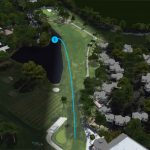 Forty-seven-year-old Stewart Cink started his first round at the RBC Heritage with what he described as “probably one of the worst opening drives I ever hit in my life.”

Cink went off Harbour Town’s par-4 10th hole at 7:33 Thursday morning and — his words again — “promptly cranked it straight into the lake.”

“Just completely went to sleep at the wheel,” he said after his round. “Sometimes that can really rattle you off the 1st hole when you start a tournament off that like. This ball was 25 yards out in the lake. It was horrible.”

This isn’t a hey-look!-Tour-pros-are-just-like-us story. Actually, it’s quite the opposite, because instead of letting that bit of first-swing ugliness bring him down, Cink used it as motivational fuel — a “wake-up call,” he said.

“After playing in the Masters and being super focused and intense, to come here and be lazy on the first shot was kind of like a slap in the face and it got my attention,” he said.

Cink’s ensuing bogey at the 10th would be his only blemish of the day on Pete Dye’s exacting test in the salt marshes of South Carolina. Cink made birdies at 12, 16 and 18 to turn in 33. On the second nine: four more birdies, plus an eagle at the par-5 5th, that resulted in an eight-under 63 that has him one back of first-round leader Cameron Smith.

“The rest of the day,” Cink said of his play after the drive at 10, “was one of my best days I can remember.”

On a course where Cink has picked up two of his seven PGA Tour wins, everything was working: he was flagging his irons, smoking his drives and rolling putts with confidence. “A round like today solidifies the game plan,” he said. “A round like this doesn’t show you there is more out there. A round like this shows you what you’re doing is already dead on, and why change anything?”

Well, yeah, other than that opening drive. So, what exactly happened?

Cink said it was the only swing all day before which he didn’t consult with his 24-year-old caddie-son, Reagan.

“I was just so relaxed and lackadaisical on the shot that I just kind of didn’t really go through my normal preparation, like picking a target and reminding myself about those external cues and the swing and what to do,” Cink said.

Reagan, good looper that he is, wasn’t about to let his father make the same mistake twice.

“Hey, learn from this,” the son said, as Stewart recalled it. “You just were a little bit lazy. You didn’t call out your target like you normally do.”

“And right then,” Stewart said after his round, “it just turned around.”

Cink tees off on Harbour Town’s 1st hole at 12:23 p.m. ET on Friday alongside Andrew Landry and Satoshi Kodaira. No doubt this time around the opening tee shot will have his undivided attention.