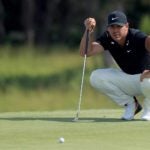 Brooks Kopeka lines up a putt during the second round of the 2020 RBC Heritage.

The first two rounds of the 2020 RBC Heritage are in the books, and Webb Simpson leads by a shot after firing a second consecutive 65 on Friday, bringing him to 12 under par overall. You can find full third round tee times for Saturday at the bottom of this post.

Webb Simpson will begin his third round in the final pairing at 2:10 p.m. ET alongside Bryson DeChambeau, who is one shot back at 11 under par overall.

Will Gordon and and TK will comprise the penultimate pairing, teeing off at 2 p.m. ET. Like DeChambeau, Connors is one shot behind Simpson at 11 under par overall while Palmer is two shots back at 10 under par overall.