What made Pete Dye, who died on Thursday at 94, the most influential figure in golf course architecture of the last half of the 20th century?

The answer is two-part. Not only did he build more world-class courses than anyone, but he also mentored a number of today’s most talented architects, helping launch the careers of such notables as Bill Coore, Tom Doak, Brian Curley, Rod Whitman and his son Perry Dye, to name just a few.

Along with his wife and frequent collaborator, Alice, who died last year, no one in the post-World War II-era had a more profound impact on the shape or direction of course design than Dye.

What else could you want from an architect?

Born in Urbana, Ohio, in 1925, Dye grew up surrounded by the game. His father, Paul, was an amateur course designer who introduced his son to golf at a young age. Pete became an accomplished player, competing in five U.S. Amateurs, one British Amateur and one U.S. Open, in 1957, the same year Jack Nicklaus made his debut in the event. Both men missed the cut, but Dye beat Nicklaus by eight shots.

Tournament golf was not how Dye would earn his keep. His breakthrough design came at Crooked Stick, outside Indianapolis, in 1966. The Golf Club, near Columbus, Ohio, quickly followed. Both were meant to be low-key clubs with small memberships. When they opened, they were arguably the best courses in their respective states. But they were also private. In an era before social media, not many people were exposed to them.

It wasn’t until Jack Nicklaus asked Dye to collaborate at Harbour Town, in South Carolina, that Dye’s talents would be seen by a wider audience. Compared to The Golf Club, which occupies rolling, character-rich countryside, Harbour Town’s raw property paled. The high to low point in the low country in South Carolina was the height of a man. Still, the 6,600-yard course design that emerged was fascinating. The fairways elbowed past live oaks with Spanish moss dripping from them. Though compelling off the tee, Harbour Town was really a second-shot course. The greens came in all shapes and sizes, some of which had never been seen before, including the wide V-shaped  9th green and the 13th green bulwarked by railroad ties. Dye popularized the use of railroad ties, but the idea was rooted in history at places like Brancaster and Prestwick.

When a who’s-who of Tour pros started winning at Harbour Town, Dye came into demand. He soon embarked on another project that would remain a personal favorite, the Teeth of the Dog, in the Dominican Republic. With more than 2,500 yards of ocean frontage, the property presented a dream opportunity for the 45-year-old Dye. One of his favorite design ploys emerged in the process: a loose figure eight routing.

In the 1990s, Dye would once more implement such a routing to great success at The Ocean Course at Kiawah, and then again at Whistling Straits, in Wisconsin, the third of four courses he would build for Herbert Kohler along the shores of Lake Michigan. After the first two of those courses, the River and Meadow at Blackwolf Run, opened for play, and Kohler was trying to figure out what to do next, he and Dye set off to Scotland to tour such classics as Cruden Bay and Machrihanish. Whistling Straits was the by-product of that adventure, its quirky features evidence of Dye’s profound love of golf in the United Kingdom. Ironically, Whistling Straits’ success ended up overshadowing both Blackwolf Run courses, each of which is well worth seeing. Their artfully contoured greens, coupled with the natural setting, make for enduring designs.

“Pete’s greatest contribution to growing the game of golf was that he considered golfers of all age and skill levels,” Kohler said in a statement. “While Pete designed to torment the most accomplished professional, his forward tees allowed the most inexperienced to play. He would challenge the professional both physically and mentally, while remarkably accommodating the raw amateur who was learning the game.” 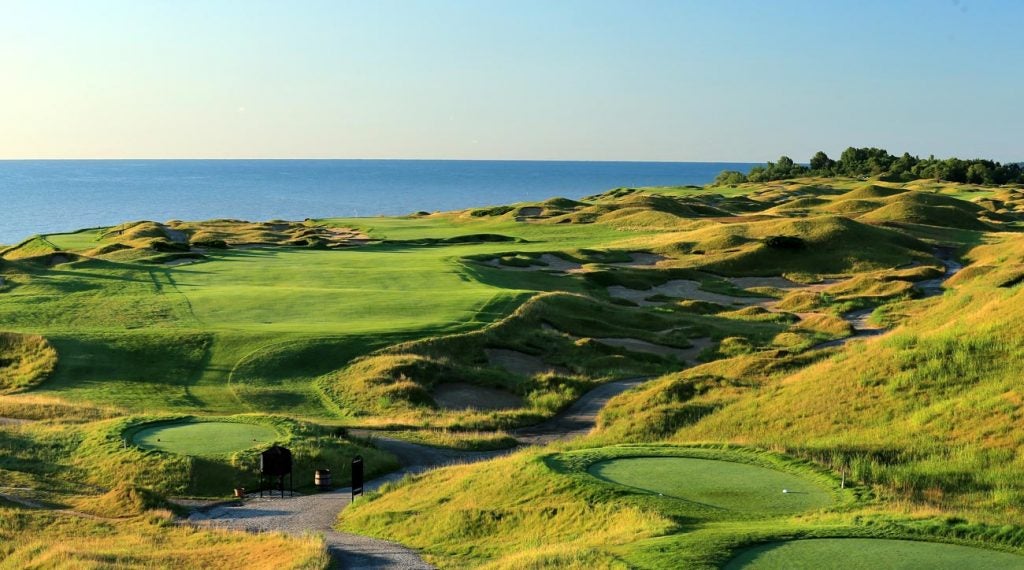 Oak Tree, TPC Sawgrass, Long Cove and PGA West are among those that appeared on GOLF Magazine’s roster of World Top 100 Courses. Originally, TPC Sawgrass was more rough-hewn than its current presentation but it featured what Dye prized most in architecture: variety. Every length hole is present, including its shortest, the infamous island-green 17th hole, for which Alice deserves much credit.

PGA West soon followed with some of the game’s fiercest hazards. Its steep-banked bunkers were something that one of Dye’s favorite architects (Seth Raynor) would have approved of. They made for wildly entertaining television, even if the professionals weren’t so enthusiastic. Many of Dye’s courses were punctuated by a dramatic closing stretch composed of a gambling par-5 16th, a water-strewn par-3 17th and a tough par-4 18th. His reputation for penal designs earned him the nickname the Marquis de Sod.

But to focus on the difficulty of some of his courses is to give short shrift to the breadth and quality of his work. To put Dye’s accomplishments in perspective, he has more courses that have fallen out of the World Top 100 than most architects could ever hope to have on the rankings. Add to the mix the Pete Dye Golf Club, in West Virginia, as well as lesser-known but affordable gems such as Fowler’s Mill, outside of Cleveland and The Fort, near Indianapolis, and his accomplishments, spread over seven decades, are more staggering still.

Two of Dye’s last grand efforts occurred in this century at French Lick (2009) and Full Cry at Keswick (2013). They highlight something else about Dye: you never could stereotype his work. French Lick features ribbon fairways and small greens with over 2,500,000 cubic yards moved during construction. Meanwhile, Keswick is more user-friendly, lay of the land design and, in that manner, represents Dye coming full circle to some of his earlier works. You wouldn’t know the same man built both courses, which is a high compliment. Most architects repeat themselves toward the end of their careers. Not Pete Dye.

Dye famously remarked that he didn’t need to produce plans because he would be on site every day. That practical, hands-on approach spoke to his Midwestern roots. It also made an impact on people who worked for him, including Bill Coore and Tom Doak. Those two headline the Dye Tree of architecture, and their firms have gone on to produce more World Top 100 courses as selected by GOLF Magazine than any other architects over the past 25 years. Other notable designers who are quick to acknowledge Dye’s influence include Rod Whitman, Tim Liddy, Brian Curley, Lee Schmidt and Bobby Weed. The list goes on.

That’s a snippet of Dye’s career accomplishments. But what about Pete Dye, the man? A pioneering architect, he was also a good person, husband and father. Let’s leave the last words to Bill Goodwin, who hired Dye for several projects, including The Virginia Tech course and Full Cry.

“You really need to appreciate that Pete is a very nice and honorable person — that makes a big difference,” Goodwin says. “I will never forget working with him at Virginia Tech where the monthly spend was always over budget but in the end, I received a final bill that perfectly matched the budget. I saw what had happened though — Pete had sacrificed his design fee and used that money on the course build. He is a true artist that puts his art first.”