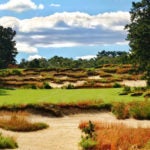 Pine Valley was going sans bunker rakes before it was cool.

I have played two outstanding courses in recent weeks that don’t have rakes in the traps. One, Pine Valley, in southern New Jersey, takes its cues from old-timey Scottish golf. The other, Bellport, on the South Shore of Long Island, is going sans rake in deference to golf in the age of this pandemic.

Pine Valley is a private course although, for one day a year (in normal times) the public is welcome to watch the final of an amateur competition named for the club’s founder, George Crump.

Bellport is owned by the village of Bellport. The course is open to all village residents but to nonresidents on a membership-only basis. It’s as muni as muni gets—if you’re on the right side of the border.

Pine Valley’s bunkers are part of its unique (shall we say) charm. They are pits of various depths with coarse sand and steep walls. Having no rakes in them is part of their great and ongoing menace. I asked Ray Fell, Bellport’s mayor and an enthusiastic golfer, if the Bellport course would consider going rake-free on an ongoing basis, even after this pandemic has run its course.

“Maybe we should!” Fell said. The Bellport course has never been busier than it is right now, even with tee times at 10-minute intervals instead of the pre-Covid eight. “People are going a great job of smoothing the bunkers with their feet. I’ve had only one time when my ball finished in somebody’s divot.”

The Bellport course is suburban in places (much of the front nine) and wild and natural in others (much of the back nine). I saw bunkers with concrete evidence of bird and deer activity. That’s OK. That’s appropriate. Golf’s original bunkers were sheep shelters.

I think all golf would be improved by eliminating bunker rakes. Yes, getting out of a bunker in one shot is an accomplishment for many golfers, and the movement in the game now, and a sensible one, is to make golf less challenging and more enjoyable for more people. On that basis, why would you want to remove rakes? OK, fine, create a local rule. Here’s the imprecise language: if you’re playing a casual round—not a competitive round, not a round you’re going to post for handicap purposes—you may lift, smooth and place your ball in a bunker.

But bunker play at Pine Valley, for now at Bellport, and in many remote courses in the British Isles, is more interesting without rakes. For starters, as you consider your shot, avoiding bunkers becomes a primary goal. That’s a good thing, when the demands of the hole are in your head as you are over your ball.

Then, if your ball comes to rest in a bunker, there’s the odd mystery of not knowing what kind of lie you will have until you get there. Now that is golf as life. The unknown. As for whether you’ve been lucky or unlucky, the same. The vagaries of golf mirroring the vagaries of life—it’s a beautiful thing. Golf on the PGA Tour would be less fair and more interesting without rakes. Golf, like life, is not fair. But it should be interesting. (These days are a little too interesting.)

I’ve been playing Bellport for 45 years, including a game the other night with my friend Jofie, a good editor and a good golfer, and we all know how rare a combination that is. We started at 4 p.m. and finished in the gloaming and were attacked by mosquitoes who were living large in the warm, still humid air. Worse yet, I recently learned some distressing news. I have for years been under the impression that Bellport is a Seth Raynor course. It certainly, in many places, looks like a classic Raynor course. But on the formidable-looking Seth Raynor Society website, Bellport is on an ignoble list of 12 courses below this heading: Clubs Purported to Have Seth Raynor Connection but Lack Proof or Contradictory Proof Exists.

Jofie and I were in bunkers more than a few times. Some of the lies were better than others, but as the kids say, It’s all good. You open the face or your close it. Move the ball forward or back in your stance. Whatever it takes. As you get nearer to Bellport Bay, especially in the middle of the back nine, you’re more likely to encounter little rocks and other irregularities. The accompanying snap shows Jofie getting out of greenside bunker in one shot on the par-5 13th hole. He entered happy. He came out happier. Clean bunker shot. Nice soccer kick to smooth it out. No fuss. Pure golf.