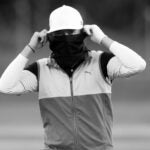 This isn't the Black Masker; our photo library doesn't have much from 1912. Still, you get the idea.

They don’t quite make golf legends like they used to.

Proof? Check out this headline, from the October 30, 1912 edition of the New York Times:

MASKED GOLFER HERE TO BEAT CHAMPION: His Face Concealed and Name a Secret, He Startles the Links with His Drives

What’s old is new again, and both “The U.S. Open” and “masks” are top of mind, which means that it’s time to wind back the clock about a century and marvel at the simple story of the Masked Golfer.

Two weeks ago, we covered Grover Cleveland Golf Course in this space, a muni in Buffalo that served as host to the 1912 U.S. Open. (It was Buffalo Country Club at the time, but is now the oldest muni to have hosted our national championship.) The winner that week, 20-year-old John McDermott, was a club pro from Atlantic City. He shot 74-75-74-71, becoming the first golfer to break par for 72 holes in the championship (par was 74). His first prize was $300.

But later that year, on a different muni in the same state, a mysterious golfer showed up demanding a match with McDermott, the stakes of which would dwarf the U.S. Open purse.

The arrival of “The Black Masker”

The New York Times was all over the story. “Golfers and visitors to the golf links at Van Cortlandt Park were not a little surprised yesterday afternoon by the sight of a man wearing a black mask, black clothes and black plush cap playing on the course,” the article read.

“Many inquiries were made, but nothing was learned of the identity of the strange golfer except that he styled himself ‘the Black Masker.'” (Sidenote: the Times evidently had no problem with the passive voice in 1912.)

The Black Masker! What a name! His appearance — and his tee shots — apparently had quite the effect on the rest of Van Cortlandt’s players that day. This was Golf Zorro, here to set American fairways ablaze.

“Other golfers were astonished at the length of the stranger’s drives, and soon practically all of them quit their play to follow him over the course,” wrote the Times.

It is very literally impossible to imagine this sort of thing happening in 2020. A mysterious golfer arrives from England and holds court at, say, Bethpage Black, where he declares he’ll challenge Bryson DeChambeau in a million-dollar match? Actually, when you put it like that, I’m in…

Drive it longer with some Pro Shop items! According to the Times, the Black Masker had never won any previous titles but “only recently discovered the secret of delivering long drives, and has since become the world’s long driver.”

An onlooker insisted that the masked man had shot 71 the previous day at Van Cortlandt — quite the feat — and even bettered 300 yards with one of his booming tee shots. But a follow-up article the following day cast some doubt on the veracity of that score:

“After his drive, which is generally long, he makes an approach shot and sometimes takes a putt, but if the ball does not happen to run down he picks it up and proceeds to the next tee.”

Sounds like a tempting way to play! But perhaps not exactly in line with the Rules of Golf, nor with any official record-setting.

One writer following the group, William Gavin, learned the reason for the Black Masker’s arrival in the U.S.: he was there to play for a great deal of money.

“The Black Masker has come to this country on a wager of $25,000 to break the records of the six best courses in the United States, and afterward, on a wager of $5,000, to beat the American Open champion in a match game.”

It’s not wholly clear whether or not Van Cortlandt fell under the description of “six best courses” but his reported 71 fell well short of a recent 66 that had been recently recorded at the course, anyway. As for the second bit of that wager? It was clarified days later, when the Black Masker challenged McDermott to play three 36-hole matches for at least $1,000 per side. The amount was actually reduced, the masked golfer’s spokesman C. Alston Tyrer told reporters, to make it clear that this wasn’t just a publicity stunt.

“The object is a purely sporting one,” one member of the Black Masker’s team told the Times, and went on to compliment McDermott’s game, perhaps trying to convince him to accept the stakes. We all watched Tiger vs. Phil last year, but who know the idea of a publicity stunt-style golf match was such an age-old tale? Not me.

On Nov. 8, 1912, another notable headline graced the pages of the New York Times:

Sounds a bit more Post or Daily News than Times, but such was the era, I guess. A special report from McDermott’s hometown of Atlantic City confirmed that he had identified the identity of the masked golfer and “stated positively that it was William Horne.”

Horne, an Englishman, was already a prime suspect; he was known for his long drives and even had “driven the longest ball ever known.” But the Times’ golf writer again threw some not-so-subtle shade: “The remainder of his game, however, is declared ordinary.”

While Horne was a solid golfer, he was not among the world’s very best; he was a well-traveled golf pro who had finished T20 at that year’s Open Championship. He had allegedly set a record by hitting a tee shot 388 yards at North Berwick in 1909, but that was his largest claim to fame; his only individual pro win came years later at the 1919 South African Open.

So what happened with the match, anyway? Masked man versus U.S. Open champ? It appears that it…never happened. It’s unclear whether negotiations broke down because of money, because of Horne’s revealed identity or some detail lost to time, but it appears that no match ever took place.

That’s not to say there was no gambling going on at the time. McDermott played his fair share of $1,000 matches, and was never one to back down from a challenge; after losing the 1910 U.S. Open, he told the winner, Alex Smith, “”I’ll get you next year, you big tramp.”

He was right; he won back-to-back titles in 1911 and 1912. But as far as we can tell, he never showed down against the Black Masker.

Horne bounced around in the years that followed, becoming golf pro at Durban Golf Club in South Africa for a time. But he settled back in New York at Rye Golf Club, where he took up pro duties in 1922, less than 20 miles from Van Cortlandt.

McDermott had a far more turbulent future. Always described as manic-depressive, he retired from golf in 1914 and was committed to Pennsylvania’s State Hospital for the Insane in 1916. An article from ESPN detailed the decades of his life post-Open win. While he spent most of his remaining years committed to the asylum, he was able to play golf in his waning years and even got to go to Merion in 1971 to see Lee Trevino take down Jack Nicklaus in the U.S. Open, 60 years after his win.

As for Van Cortlandt? It remains the oldest public golf course in the United States. If you go there this week, you’ll see plenty of golfers wearing masks. But it’s unlikely that any of them know the story of the Black Masker. Unless they read Muni Mondays, of course.