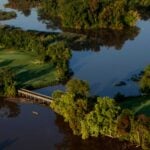 Langston has been a longtime home for Black golfers in and around Washington, D.C.

The superior restaurant announces itself when you walk through the door. Fried garlic from an open-air kitchen. (L’Angelo, corner Porter and Rosewood, South Philadelphia.) Red wine being poured at a nearby table. (Piatti, Avenida de la Playa, La Jolla Shores, Calif.) Chocolate mousse passing by on a corked tray. (Lion’s Rock, E. 77th Street, NYC, permanently closed.) And so, in different ways, it is with your better pro shops.

I entered the pro shop at the Langston Golf Course, off busy Benning Road, not far from RFK Stadium in Washington, D.C., with no expectations. (Expectations are so 1999.) It’s one of the best.

Langston, if you don’t know, has been a longtime home for Black golfers in the District, going back to times far more defined by color lines than these are. Lee Elder, already a Tour legend, was its teaching pro and manager for years. The work-in-progress Howard University golf team, funded by Steph Curry, will make Langston its home course. Beau Welling, the golf-course architect who works with Tiger Woods, is on the docket to renovate the course, owned by the National Park Service and managed by a new group called the National Links Trust.

Langston’s future is so bright it will need shades. The pro shop I walked into on a recent Saturday was a time capsule.

There were no clubs for sale. The food service, for now, was limited, a nod to these strange times.

What bowled me over were the powerful, knowing and proud nods to the Black golf experience in this country. A photo of a crouching Tiger Woods, lining up a putt under the brim of his black Nike hat, at the height of his smoldering intensity. A painting that depicted Charlie Sifford, Calvin Peete, Jim Thorpe, Lee Elder, Jim Dent and Tiger. A plaque and a portrait of John Mercer Langston, a 19th-century American educator, politician and lawyer and the great uncle of the poet Langston Hughes. Maybe you read “Dreams” in high school:

Hold fast to dreams
For when dreams go
Life is a barren field
Frozen with snow.

I can’t imagine Earl Woods, with his towering intellect, not knowing the work of Langston Hughes, or the history of John Mercer Langston, or the contributions of city courses to the game. He took up the game at the Dyker Beach course, in Brooklyn, at the tail end of the Vietnam War. The military experience and the Black golf experience weave like the figure-8 weave the Harlem Globetrotters executed so brilliantly. No Dyker Beach G.C., no 15 Grand Slam titles attached to the Woods name. That’s my take, anyway.

(And, while we’re at it: Happy belated Veterans Day, to any veterans who have found their way here. Thank you for — for far more than any of us can say. Almost every major club manufacturer offers discounts to active military members.)

What bowled me over in the Langston pro shop were the two Black men — Ben Foster and Ernie Andrews — who happened to be behind the counter that afternoon. They are the Penn and Teller of Langston. Not in the magic sense, but in the talking sense. Mr. Andrews is as quiet as Mr. Foster is loquacious. Ernie Andrews is a legendary teacher — at Langston. You want to learn a proper grip? Ernie’s your man. You want to model rhythm? Ernie’s your man. And if you get him started, about golf and Langston and all the rest, he can go deep. On the range, he will teach you a swing that you can make and that will not hurt you. How’s that for a starting point!

Here’s another starting point. “The driving range, that’s our first priority,” Welling told me the other day. A college golf team (Howard, in this case) needs a range where they can get work done, in the dawn’s early light and all through the day.

A PSA for the Nat’l Links Trust: the group is raising money to renovate three historic courses in the District: Langston (Welling), East Potomac (Tom Doak presiding) and Rock Creek (Gil Hanse presiding). This is all pro bono work, all the way around.

You can get a caddie at Langston, by the way. Not now, but in season. There’s about a dozen local kids caddying there, and the Western Golf Association, keepers of the Evans Scholars Foundation, pay the caddie fees. You tip if you wish. Lee Elder’s old friend, a legendary caddie named Richard “Jelly” Hansberry, is a sort of mentor to the program. “These kids are starting to get it,” he told me.

In other words, the value in showing up, the joy of cash money, the pleasures of the game, the lessons that come with hanging with cranky old golfers.

Ben Foster is tall and slender and styling. He was wearing maroon plaid pants that only he, Rickie Fowler and the late Cal Peete could pull off, a fuchsia windbreaker, a purple baseball cap. He’s a retired publishing salesperson (among other business pursuits) who is active in a program called Golf My Future, devoted to introducing the game to people in hard-to-reach corners. The man is loaded with personality. Golf shops used to be packed with people like that, behind the counter, before golf went corporate.

You want a gray Langston Golf Course hat? Ben would rather see you in a blue one. Give him a minute.

Nope, brother — out of blue. But you know what? That gray one will be perfect on you.

I’m all over the lot here. I realize that, and you haven’t even stepped on the golf course, which opened for play about 100 years ago. We’re going to save that for another time. For now, it’s definitely a playable, pleasant course. Welling made the point that he and his people are not going for Harding Park here — turning a nice public course into a course where you could hold a Presidents Cup. Good call. Welling will tell you what every smart golf person will tell you: Golf needs courses where you can walk, find your ball, play in a reasonable amount of time and for a reasonable price.

Foster took me out to his car, an old black Audi, big as whale and in perfect condition with a golf shop in its trunk. But he didn’t have the thing he was looking for, the new Langston Golf Course scorecard.

He mailed me two.

I was bowled over. Again.

First off, every hole is named for an iconic Black golfer. The first is John Shippen. The 7th is Ann Gregory. The 14th is Pete Brown. When I met Brown he was on his last legs and living with his wife in a house in Augusta, Ga., owned by Jim Dent. You know who the 18th is named for.

The card is gorgeous. The back tees are called Royal, for the historic men’s golf club at Langston. The forward tees are called Wake-Robin, for the historic women’s golf club at Langston. On the bottom left is a dotted line where you attest — attest! — to your score. The ink is black and red and the paper-stock has not a bit of wax in it, heavy enough to easily absorb pencil marks. A good scorecard pencil has 2B lead in it. In other words, on the soft side.

Why would anyone want to keep score on a phone?

I saw the card and called Colin Sheehan, the Yale golf coach. He’s an expert on scorecards. Turns out, he designed this new Langston card. God love him.

It’s not meant to be the everyday scorecard. It’s a special occasion scorecard. 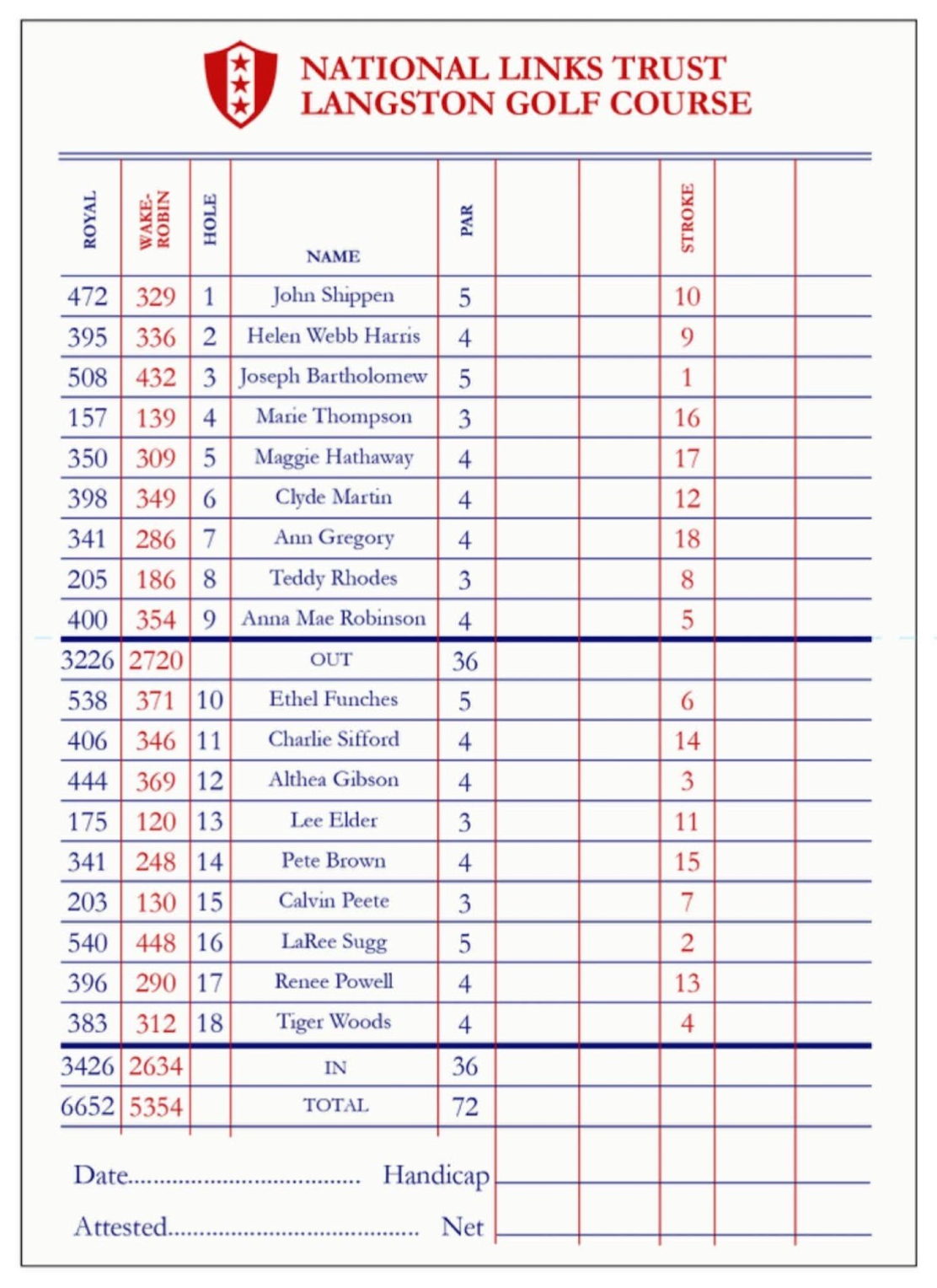 It was printed on a 120-year-old press at Dexterity Press in New Haven;

The eggshell paper is 110-pound stock from Mohawk Paper in Cohoes, N.Y.;

The typeface is Garamond.

It’s not meant to be the everyday scorecard. It’s a special occasion scorecard. Here’s to your first sub-100 score!

Welling will oversee the removal of tons (literally) of invasive plants and then the course will have beautiful views of the river, the Anacostia. Select tree removal will allow grass to grow in the places a golf course needs it most — like on the greens. When the work is done, Langston should drain better than ever before.

Coach Sheehan made a good point: The earliest golf was urban. St. Andrews was on the edge of town. People walked to it. You didn’t need a horse or a bike or a car. There was lightness on the edge of town, in the air, in the sky, a green rug underneath. City golf.