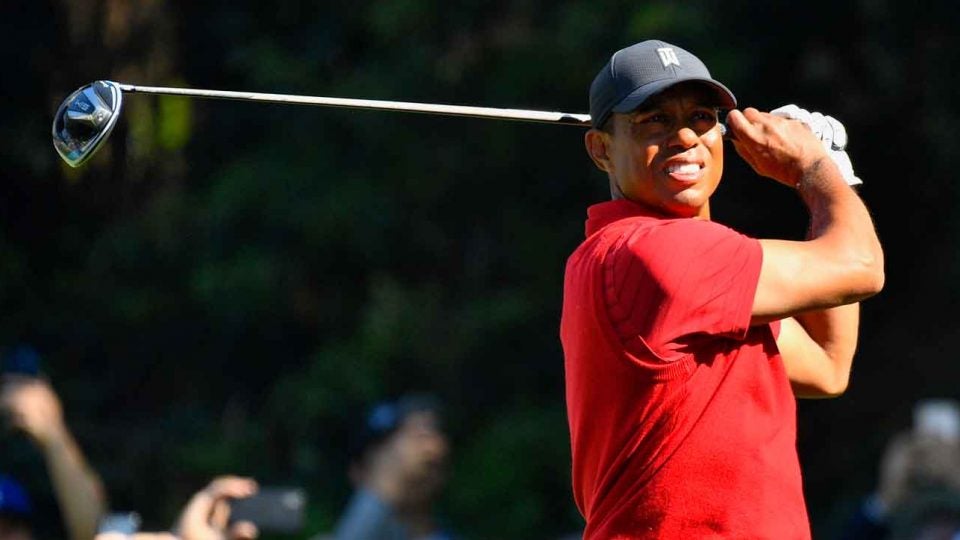 Tiger Woods during the Genesis Invitational in February.
Getty Images

The young golfer would make a 5 on the par-5, and his dad would say that hole would play as a par-4 the next time out. Same concept for par-4s and 3s. The young golfer said he didn’t like it.

“It taught me never be afraid to go low,” said the 15-time major champion and 82-time PGA Tour winner.

“I don’t know what that dude saw in my game, but he really knew putting. He knew my stroke,” Woods said Sunday on the one-hour “Tiger Tales” on CBS. “I’ve had coaches throughout my career, but my dad was the best teacher I’ve ever had with putting and probably ever will.

“Under pressure, under the gun, when I need to make putts on the back nine, I always revert back to my dad’s teachings.”

Other highlights from the show:

More stories like this on Tiger Tales premiering today on CBS at 2 p.m. ET. pic.twitter.com/e3FP4zPUa6

Younger players on Tour grew up idolizing him.

“We watched him have no mercy on anybody,” Justin Thomas said. “That’s when I was like, ‘I want to be playing against Tiger. I want to be doing what he’s doing.’”

Said Brooks Koepka: “As a little kid, how cool would that be to have that intimidation factor. The Tiger effect. Tiger made it cool to play golf.”

Said Tony Finau: “He’s the Dr. J and the Michael mixed in one. He taught us how to slam dunk, crossover. All that stuff, we learned from Tiger and he made it big, so we’re just carrying the torch now.”

Harold Varner III wanted his idol’s autograph at an event. His idol walked past him.

“I guess I would have been 11, 12. It was just like a walkthrough,” Varner said. “And I waited on the road right there and I was just like, ‘Dude, come on,’ and he walked right by me. Pissed. So mad.”

“And I’ll never forget the first time we played together, and we’re walking up 18,” Varner said. “I was like, ‘Man, you didn’t even sign my autograph. He’s like, ‘That’s probably why you’re here right now – you probably got mad.’ I was like, ‘You right.’”

Woods described his daily training as a younger pro – 4-mile run in the morning, followed by lifting at the gym, golf for 2-3 hours, short-game work, another 4-mile run and finally basketball or tennis. Woods’ fitness has impressed athletes from other sports.

“When he came on the scene, he was lean, streamlined and he hit a long ways, so everybody started saying, ‘Wait a second, maybe if I can get myself in better shape, it would give me the advantage on the course,’” said former NFL running back Jerome Bettis.

Said Arizona State football coach Herm Edwards: “He kind of set the standard, the physical fitness of guys now on Tour. They’re different looking obviously. I think he had a lot to do with that.”

Said former major league baseball player Joe Carter: “Now all of a sudden Tiger comes in, now they’re in shape. It’s changed because the guys are fit and they are bombing the ball.”

Other golfers jumped on. Golfer Billy Horschel showcased his box-jump routine on an airing of “Inside the PGA Tour.” Woods didn’t buy it.

“So a couple of days later, he’s warming up before Friday’s round, I sort of get his attention, and there’s a water cooler right there,” he said. “Like, ‘Hey, Tiger, look at me. I can jump on this water cooler.’ Well unfortunately the cooler’s hinges were broken. And so I jumped up on it and the cooler top went out from under me and I fell backwards and he absolutely died laughing – I mean on his knees laughing.”

News
Which events will Tiger Woods play in the revised PGA Tour schedule?

The admiration extends to the practice putting green.

Everyone’s putting on one green at a tournament, Jason Day said. But Woods gets his own hole.

“And there was like a 20-foot barrier of nothingness around him, where it was just him putting to one hole, and everyone else was putting to all these other holes,” Day said. “He just had one special hole. It was just amazing to see the Tiger aura.”

Bryson DeChambeau was known as “Rain Man” to Woods

Bryson DeChambeau first went by “Rain Man,” perhaps a nod to his analytical approach to the game.

DeChambeau now goes by “Beefy,” perhaps a nod to his work in the gym.

“He loves that kind of stuff,” Johnson said. “He’s got a lot of nicknames, too. He goes by his nickname technically. Once you get to know and understand the personal side of him, he’s extremely enjoyable to be around. Just a great individual.”