My home course just suffered a serious injury — and now I hurt, too 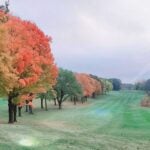 Earlier this month, according to the Milwaukee Journal Sentinel, “some unwelcome guests” (the Facebook and Twitter comments had juicer descriptions) rode through the 13th and 14th greens and left large tire tracks on both. The County Parks’ Facebook page said it would carve out temporary greens in the fairways on the par-4s, and that “unfortunately, that means that the greens will not be in good condition for the rest of fall 2020 and potentially into next spring 2021.”

My home was broken into. Someone came in and robbed me of the short grass of the two smallish, front-to-back sloping greens. They tore out two of its 18 teeth, too. The 13th hole is uphill for the last 150 or so yards of its 328-yard journey, so it’ll likely become a par-3 now. And the 398-yard 14th starts downhill, then ends uphill toward the green, so it might become a driveable par-4. Easier, yes. Hard to deal with, yes.

My home needs a hug.

In this Muni Monday space, muni aficionados have penned odes to their publicly owned playgrounds. I’m also going to. I need to. For therapy. I’ve played no other course more times in my 25-plus years of playing this game.

Sidenote: I actually tested myself there. Those aren’t the actual yardages. They’re just from my memory. Could I rattle off a short description of every hole without looking? I was off by 240 total yards, which feels close enough to be proud of. I’ve played Whitnall plenty.

I’ve made memories at Whitnall, too. Many. As it and I both heal, here are my top three. Let’s reminiscence together.

Whitnall and other Milwaukee County courses, when I was in high school and college, offered a deal where you could play as many holes as possible for 5 bucks starting around 6 p.m. One time, I think, my friend Matt and I played all 18. Walking. What a bargain.

But (There’s always a but, right? — and this one was an itchy pain in one.) there were the mosquitoes. Whitnall summers always brought out the skeeters. You could suck at golf, and they would suck your blood. We’d leave smelling like golf course, sweat and deep-woods Off!

But it was still a small price to pay. Both financially and physically.

Whitnall, one summer afternoon, had one cart left. And there were three of us. We did the math. One person would walk six holes apiece (or, shh, ride on the back.) I’d ride the first six. I’d walk the second six.

We finished the front nine. We approached the back. Dark clouds did, too.

Our two-seat cart needed to get three seats back to the clubhouse.

Three dry-ish seats got back. Awkwardly.

A course became a home

I played Whitnall with my high school golf team my junior and senior years. Whitnall was our “home” course. We’d drink Mountain Dews and figure out to ask girls to Homecoming at the picnic benches near the 9th green.

I’ve played Whitnall nearly every year after I left Milwaukee.

Ironically, I’ve never really played it well. I’ve even, on occasion, have replaced the “W” with an “S” in its name. (I can’t spell it here, so you’ll just have to say it out loud.) It’s weird, right?

Travel mailbag: What are Alabama's best public courses not on the RTJ Trail?