Edgewood Tahoe price: What it costs to play the American Century Championship course 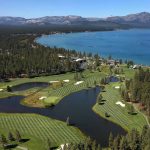 An aerial view of Edgewood Tahoe, home of the American Century Championship.

Want to play where celebrities and star athletes are teeing it up this week? Lucky for you, you can. The American Century Championship, a celebrity golf event that started in 1990, has long been played at Edgewood Tahoe at Edgewood Tahoe Resort in Stateline, Nev. The resort sits just off Lake Tahoe and provides spectacular views along a George Fazio-designed golf course that opened in 1968.

While you won’t be able to snag a tee time during American Century Championship tournament week — which is held every July — you can most of the year before the snow hits, since the course is open to the public.

Golfers can reserve a tee time up to 60 days in advance by calling the resort or booking online. Prices are dynamic and seasonal with twilight rates as well. The lowest you’d pay is $120 (spring weekday twilight) and the highest would be $320 (July and August weekend). Other prices range somewhere in between. To book a tee time, click here, and for more information on greens fees and the course, click here.