The 5 most memorable moments from the American Century Championship 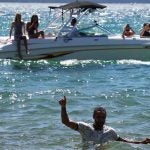 Steph Curry has made a dip in Lake Tahoe an annual bet-settling tradition at the American Century Championship.

The American Century Championship at Lake Tahoe’s Edgewood Golf Course is now entering its 32nd year. The made-for-TV celebrity golf tournament features a 54-hole modified Stableford format and annually attracts some of the biggest names in sports and entertainment.

The tournament has gained a reputation for its party atmosphere — especially on Edgewood’s par-3 17th, which is flanked by the shore of Lake Tahoe on the right side, enabling revelers to catch the action from their boats. The scene is reminiscent of the 16th hole at the Waste Management Phoenix Open. Edgewood’s 17th is also the site of several of the tournament’s most memorable moments, five of which are listed below.

Stephen Curry and his father, Dell, are now veteran participants at the American Century Championship. And they have a fun recurring side bet: The loser of their personal match has to take a post-round dip into Lake Tahoe. Check out this fun clip from 2017.

Kansas City Chiefs tight end Travis Kelce knows how to pump up a crowd, and nothing gets ’em going like Happy Gilmore’s Bull Dance — which was famously borrowed by Boo Weekely at the 2008 Ryder Cup. Keep on feelin’ the flow, Travis!

Watching a player make a hole-in-one is always a thrill, but when that hole-in-one is also worth $1 million — well, that’s in a whole other league. Check out former NHL star Joe Sakic dunking one with an 8-iron on Edgewood’s par-3 17th. The best part? The ace was the first of his life! Nice timing.

Adding to the mayhem on the 17th hole was the addition of a basketball hoop. While several players made some impressive baskets from long range, it’s tough to top this backwards, behind-the-head slam by Larry the Cable Guy. Git ‘er done, indeed.

The 17th hole is also a popular place for the athletes in the field to showcase their other talents. When former NHL star Jeremy Roenick was paired with John Elway, it seemed like a prime opportunity to go long for a throw from the NFL legend. Not only does Roenick manage to juke the caddie on his route, he also goes all-in by tumbling over a small tree after catching the pass. In short, it is must-see TV.

What crazy hijinks will this year’s field bring? You can tune in to the action beginning on Friday, July 9, at 5 p.m. ET on NBCSN or the NBC Sports App.