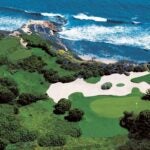 Enjoy epic views of the Pacific on this road trip up the California coastline.

Buckle up, folks, and welcome to the fourth installment of America’s Best Golf Road Trips, a six-part GOLF.com series in which our well-traveled writers will guide you through some of the most thrilling itineraries for golfers with a nose for the open road. Each journey will be built around golf but we’ll also sprinkle in a few other sights and stops along the way. Bon voyage!

Slip on your shades, slide open the sunroof and stash your sticks in back. A long weekend approaches, and a road trip awaits. We’ll be motoring north on the Pacific Coast Highway, also known as Highway 1, the famously scenic route that hugs the California coast, on our way from Orange County to the Monterey Peninsula. The entire trip will cover roughly 370 miles; you could do it in a day if you really had to. But this is not a journey you want to rush. Though our main purpose is to play a lot of golf, we’ll be pausing now and then to appreciate surroundings that capture the character of coastal California in all its beauty, bounty and occasional bizarreness. The itinerary below isn’t etched in stone. Feel free to modify it to your liking. Off we go, with the world’s largest water hazard looming to our left.

In preparation for this stunning drive, please turn your attention to this … stunning drive: your opening tee shot at the Resort at Pelican Hill, a luxurious destination just south of Newport Beach. Pelican Hill is home to two top-notch Tom Fazio designs, the South Course and the North Course, sibling layouts shaped over a dramatic landscape of canyons, ridges and beachside bluffs. Each course offers all the challenge and eye-candy you could ask for. If your schedule allows, it’s worth playing both. In a coin toss, though, we’ve booked you on the North Course, where the par-5 opener plays to a broad-shouldered fairway, with the Pacific sparkling in the backdrop. It’s a fitting prelude to a round that affords you ocean views on every hole.

Day 1 (afternoon): The Links at Terranea

For more than 30 years, starting in the 1950s, the Palos Verdes Peninsula was home to Marineland of the Pacific, a seaside animal theme park best known for its performing killer whales. Today, the main attraction is an artful nine-hole par-3 course, the Links at Terranea, with shots that range in distance from 100 to 170 yards and an ocean panoramic that seems to stretch forever. The course is the centerpiece of a chic Mediterranean-style resort, a sweet spot for recharging overnight. Trust us, you won’t miss Shamu.

Set on sand-strewn bluffs, just north of Santa Barbara, this seaside layout often draws comparisons to Torrey Pines. Both courses were designed by William P. Bell, and there’s a kinship not only in their architecture but also in their wind-kissed coastal locations. One key distinction is that while Torrey is municipally owned, Sandpiper belongs to Ty Warner, the billionaire creator of Beanie Babies, who bought the place in 2003.

Remember Sideways, the Oscar-winning buddy flick about a pair of wayward souls on a weekend getaway? Much of it was filmed in Santa Barbara wine country, the vineyard-latticed region just northeast of town where pretty much everyone recalls the movie. They’re even willing to help you relive it on Sideways-themed tasting tours, with stops to savor acclaimed local wines at spots where the film was shot.  As you may recall, the flick also featured a comedic golf scene. The real-life backdrop for it was the River Course at Alisal, a public layout, roughly 40 miles inland, in the Santa Ynez Valley.

They say that a man’s home is his castle. That was certainly true of, well, Heart Castle, which sits just eight miles up the road from the seaside village of Cambria. Sometimes, though, a man’s castle is more like a scrap heap, as evidenced by Nitt Witt Ridge, Cambria’s quirkiest claim to fame. In 1928, an eccentric artist named Arthur Harold Beal bought a hillside lot here and began building the dwelling of his dreams out of beer cans, car rims, stove parts and other discarded items, including remnants from Hearst Castle, where Beal is said to have once worked. Beal died in 1992, but his whimsical monument remains open to the visitors for guided tours. You can’t stay overnight in the ramshackle bedrooms here, but no worries. There several boutique hotels in and around Cambria, which leave you well positioned for Sunday morning push to Pebble Beach.

On a highway with no shortage of natural beauty, you have just completed an unrivaled stretch, highlighted by your passage through Big Sur, the rugged expanse of undeveloped coastline where the Santa Lucia Mountains rise abruptly from the sea. You’re now barely 15 minutes from 17-mile Drive, the private toll road that leads to Pebble, but since you’ve got a few hours before your tee time, do yourself a favor and pull off at Point Lobos.  A $10 entrance fee gets you access to a wild, coastal reserve of craggy bluffs and wind-coiffed pines and roiling inlets where otters backstroke in the waves, clacking shellfish like castanets. To get a sense of the grandeur of the setting, picture Cypress Point, without the course.

This is it, the course you’ve played a thousand times in daydreams, the layout you’ve admired forever on TV. It’s every bit as good as you imagined. Better, even. Make this one a blowout. Book a caddie. Pause for photo-ops. Shake off any bad shots. Savor all the good ones. You’ll remember this day. Cap off the experience with dinner in the Tap Room, the atmosphere-rich tavern, lined with photographs of famous golfers and other mementos from Pebble’s long, indelible history. Don’t stop there: spend a night at the sumptuous Lodge. You’ve earned it.