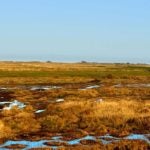 The size of the fairway depends on where the tide is at certain times of day.

Our knowledgeable crew of course raters have stuck pegs in the ground just about everywhere. But which holes stand out as the greatest they’ve ever played? We asked them, and they replied with love letters about their faves. This offering comes from Thomas Brown.

Inspired largely by self-interest, but also by the urge to mix things up, I proposed to my editor a Gordon Ramsay-style tour of clubhouse dining rooms around the world. I would sample fresh durian in Thailand, dim sum offerings in Hong Kong, wine-lubricated lunches throughout France — my indulgent travel funded by a GOLF.com expense account.

The response I received — “Are you out of your flipping mind?!” — suggested I might need to modify the pitch. The compromise is to stick to course architecture. To me, the 8th hole at Royal West Norfolk in England, approximately 120 miles northeast of London, is the best hole in golf, and foursomes is the ideal match-play format for it. At 494 yards, this par 5 offers an opportunity of birdie, even the distant possibility of eagle.

Royal West Norfolk overlooks Brancaster Bay and is more commonly referred to as Brancaster. Brancaster is a links course that becomes an island during high tide. Access to the club is a narrow road, which lies underwater much of the day. Driving into the club must be timed to coincide with low tide.

The 8th hole is an ideal design for match play. The tee shot is hit to an island fairway. The width of safety in the landing area — that is, the level of the water left and right — is determined by the tide at that time of day. A safe shot in the morning round may be a lost ball underwater in the afternoon. The second shot suits match play well, as the safe lay up from the island fairway is a simple, short carry to the next fairway on the left. The aggressive play to make the green in two shots may either be played as a carry shot over the tidal marsh or as a more cautious fade designed to bounce into the left corner of the green. An eagle in foursomes is a remote outcome, but a thrill worthy of a hearty celebration.

Back to my dream of a lunch tour, two-ball clubs often prioritize the most important hire at the club to be the chef. Foursomes-wise, I have been under the tutelage of a household name in British politics for several years now. Wine served with lunch is an important part of the proceedings. The match-play results from either the morning or afternoon are a lesser concern. If this column were instead titled the Best Lunch in Golf, I would insist on the lunch in Sandwich, England at Royal St. George’s. But that’s a story for another day, backed by a healthier expense account.