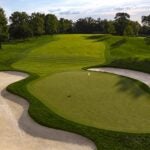 For every great course that made GOLF’s 2020-21 ranking of the Top 100 Courses in the U.S., dozens of more must-plays were left on the outside looking in — including at least a handful in your home state. Some of these designs just missed out on a Top 100 nomination, others finished deeper down the ranking, but all are worthy of your time. To shed light on the best courses in every state, we broke out the full results of our Top 100 Courses polling into state-by-state lists. Here’s a closer look at Ohio.

Ohio golf by the numbers:

Gear up for your next round in Ohio This low-key 1926 Seth Raynor creation in suburban Cincinnati dishes out deep bunkers and huge, squared-off greens on a property laced with valleys and ravines. The usual quartet of Raynor template one shot holes (Redan, Short, Biarritz, and Eden) are here and rival his best set.

Andrew Green’s recent renovation restored Ross features, expunged those that were not and added length to test today’s tournament players. Ross spent much personal time on this design and it manifests itself with a stunning collection of par-4s headlined by the 6th, 7th, 15th, 17th and 18th. Inverness’ home hole famously measures under 400 yards and is one of the most interesting closers in the game. Too bad more modern architects are leery to build finishers that reward mind over muscle.

One of Pete Dye’s early masterworks, this rural retreat in suburban Columbus is where Jack Nicklaus first learned about design, as an unpaid consultant. With bunkers and water hazards framed by railroad ties and tall native grasses scattered throughout, the distinctive Dye style began to take hold. A superb set of par-5s is but one of the highlights.

Conceived by Jack Nicklaus in 1966 to be his hometown equivalent of Bobby Jones’ Augusta National, this 1974 collaboration with Desmond Muirhead was an instant smash, both for its strategic design and flawless conditioning. Equally impressive was how Nicklaus seamlessly integrated spectator areas into the closing holes, using hillsides and amphitheater-style mounding to provide patrons with clear views of the action. Nicklaus shut down the course this past summer, and all eyes will be on what the Golden Bear has concocted to thwart the relentless advances in technology when the course hosts the annual Memorial Tournament next year. Hard to imagine that the professionals now try to drive the sliver of green at 14 but that’s how the game has changed. And certainly the 14th has never flinched in being able to defend the integrity of par. That’s great architecture.

Even in the golf-rich Buckeye state, this course has long held a special place, including hosting the 1945 PGA Championship won by Bryon Nelson. Though admired, it didn’t generate today’s level of affection until Keith Foster’s 2015 restoration that saw trees felled and the property allowed to breathe again. Now, every golfer is free to soak in its special landforms and understand that this rollicking Golden Age design by Alex “Nipper” Campbell is indeed set across a glacial moraine.

Course spotlight: The Golf Club (New Albany), ranked 3rd in Ohio. Sometimes rock stars’ best songs are on their first album. Has Dire Straits ever topped Sultans of Swing? Did the Police ever top Roxanne? Well Pete Dye’s earliest work seems to stand the test of time better than a lot of his later work. This place has exactly the right name. It is a Golf Club, and perhaps the Golf Club of distinction in Ohio. What a great chance to see what Dye could do as a young man. Thank goodness Pete Dye went to the British Isles and thought, “Golf started here and these courses are what golf is supposed to emulate, so even when my terrain isn’t like theirs, I still need to find some of that essence.” — GOLF Top 100 Course Rater