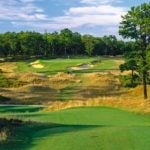 A view of Old Sandwich in Plymouth, Mass.

For every great course that made GOLF’s 2020-21 ranking of the Top 100 Courses in the U.S., dozens of more must-plays were left on the outside looking in — including at least a handful in your home state. Some of these designs just missed out on a Top 100 nomination, others finished deeper down the ranking, but all are worthy of your time. To shed light on the best courses in every state, we broke out the full results of our Top 100 Courses polling into state-by-state lists. Here’s a closer look at Massachusetts.

Massachusetts golf by the numbers:

Gear up for your next round in Massachusetts A Boston Brahmin society haunt for more than 100 years, this tree-lined design has played host to three U.S. Opens and the 1999 Ryder Cup. Its tournament course is a composite layout, comprised of 18 of the club’s 27 holes. The Clyde/Squirrel combo was used for the 1913 Open when local lad Francis Ouimet stunned the big, bad Brits. Its old-school features include cross hazards and medium-size greens and the golfer is freshly reminded that there is no substitute for hitting fairways and greens. Scramblers best test their games elsewhere.

Some critics of rankings grumble that hosting a major unduly elevates a course. Is that true for Myopia Hunt, given that it has hosted four U.S. Opens? Probably not, given its last one was in 1908. What helped Myopia jump up the list was recent restoration work whereby trees came down, and fairways were expanded/reconnected to Herbert Leeds’s fabulous pit bunkers. With the wind more evident and the playing surfaces firm, the course’s thorny playing attributes are once again on full display. Fun fact: The winning score at its four U.S. Opens averaged nearly 324, or 81 strokes per round.

A modern classic with a starchy, old-school vibe, Old Sandwich occupies choice ground in the pine hills of eastern Massachusetts, where the land begins to elbow toward Cape Cod. Though not on the water, the course is often buffeted by Atlantic breezes, while its sand dunes and fescues add an extra layer of coastal atmospherics. Short par-4s are something of a point of pride for Coore and Crenshaw, and the Cape-style 5th is as fine an example of any they have built. But the 7th might be the more memorable two-shotter, with its green perched, island-like, amid a sea of sand.

Herbert Fowler will always be associated with his beloved first design, Walton Heath outside of London. In that instance, he had to lend the open heath its golfing qualities as the site featured modest topography. What he was presented with here on Cape Cod was the exact opposite: a glacial moraine with tumbling landforms that converge in the most random manners. What a challenge to route but his figure-8 routing with the clubhouse in the middle seized on the opportunity to perfection. For original holes, few courses can compete.

Having hosted the Ryder Cup in 1952, this club has long enjoyed an enviable reputation. Now, thanks to a slow and thoughtful 20-year restoration by Gil Hanse, the course might actually exceed its reputation. Central features in the form of either bunkers or grassed-over mounds make the course a tactical delight off the tee, while the greens, from its famous island green on the beach at the 3rd to the built-up knob at 16, make for an elusive set to hit in regulation. Hard by Buzzards Bay, the course is exposed to wind, which adds additional challenge to the task at hand.

Forget about its pedigree history that includes the Curtis sisters (yes, as in the Curtis Cup) and Donald Ross, Essex shines for having one of the best collection of holes in New England. After tackling a 600-plus yarder at the 3rd followed by a you-might-need-driver-here par-3 at the 4th, the golfer may be feeling bruised. But what ensues is possibly the best set of par-4s holes in the state, highlighted by 17 and 18, which play up and down a small mountain. As handsomely presented as any Ross course in the country.

Book a tee time at Taconic.

Course spotlight: Taconic Golf Club (Williamstown, Mass.), ranked 16th in Massachusetts. Mountain courses can be extremely challenging. Finding that “just right” balance of variety in the terrain without getting too hilly is rare. Stiles and Van Kleek were given a wonderful piece of property that is as beautiful as any mountain course in the northeast. This is a great, restrained work that lets the lay of the land do so much. This semi-private course hosts the Williams College golf team and is highly worth a visit for anyone touring the Berkshires. — GOLF Top 100 Course Rater

Come to Kohler, Wisconsin, for the Ryder Cup, stay for its small-town charm