Every cent of profit from American Dunes will go toward the Folds of Honor Foundation.

It will be one of the most humbling walks in golf, and it will happen before you arrive at the 1st tee.

At American Dunes Golf Club, a newly reworked layout in Grand Haven, Mich., that has just about wrapped up its finishing touches, the entrance from the parking lot onto the grounds is a soon-to-be completed walkway that will double as a military tribute. As you follow it toward the clubhouse, you will pass through an open-air tunnel with unmistakable markings in your path. Embedded in the otherwise smooth cement will be the bootprints of United States service members who died in the course of duty.

Consider it a fitting introduction to the day.

“The entire experience here is meant to be a reverential one,” says Lt. Col. Dan Rooney of the U.S. Air Force. “It is very intentional on our part that everyone will come and leave through that memorial in recognition of those who made the ultimate sacrifice.”

An F-16 fighter pilot and a certified PGA professional, Rooney is also a pivotal figure in the story of American Dunes, which held a media sneak-peek early this week and will open officially to the public next spring.

In 2007, fresh off his second of three tours of duty in Iraq, Rooney was on a commercial flight from Chicago to Grand Rapids when the pilot announced that a hero was on board. The plane was carrying the remains of Army Cpl. Brock L. Bucklin, who had been killed in action in Iraq the year before.

After the flight landed, Rooney got a glimpse of what he calls “the other side of war.” Standing on the tarmac, watching passengers de-plane, he couldn’t take his eyes off Bucklin’s family, including his four-year-old son, Jacob, as they waited to receive the flag-draped casket.

“At that moment, I knew with every fiber of my being what God was calling me to do,” Rooney says.

What Rooney did was found Folds of Honor, a nonprofit that supports the families of fallen and disabled military personnel. As the first fundraiser for his organization, Rooney decided to hold a golf tournament that summer.

It so happened that he had the perfect venue for it: a course his parents owned, along the eastern shores of Lake Michigan, that was known at the time as Grand Haven Golf Club.

In the decade-plus since that inaugural fundraiser, Folds of Honor has furnished more than 28,000 scholarships to military families, totaling $140 million.

But Rooney is always looking to do more.

Nearly three years ago, with his parents at an age when they were ready to step back from running a golf course, he saw another chance to strengthen his cause.

“The easy left would have been to sell the property as real estate,” Rooney says. “The hard right was to do something more ambitious and create a lasting legacy.”

A plan took shape in his mind to renovate Grand Haven and put it to a greater purpose: as a tribute to the military on the very grounds where Folds of Honor was born. To execute that project, an architect was needed, and once again, Rooney knew where to turn.

In July 2018, he arranged a meeting with Jack and Barbara Nicklaus and described his vision. Moved by Rooney’s pitch, the Nicklauses signed on. In addition to waiving his design fee, Nicklaus helped round up private donors, who supplied much of the necessary funding to push the project toward the finish line.

I love the game, but I love my country even more. 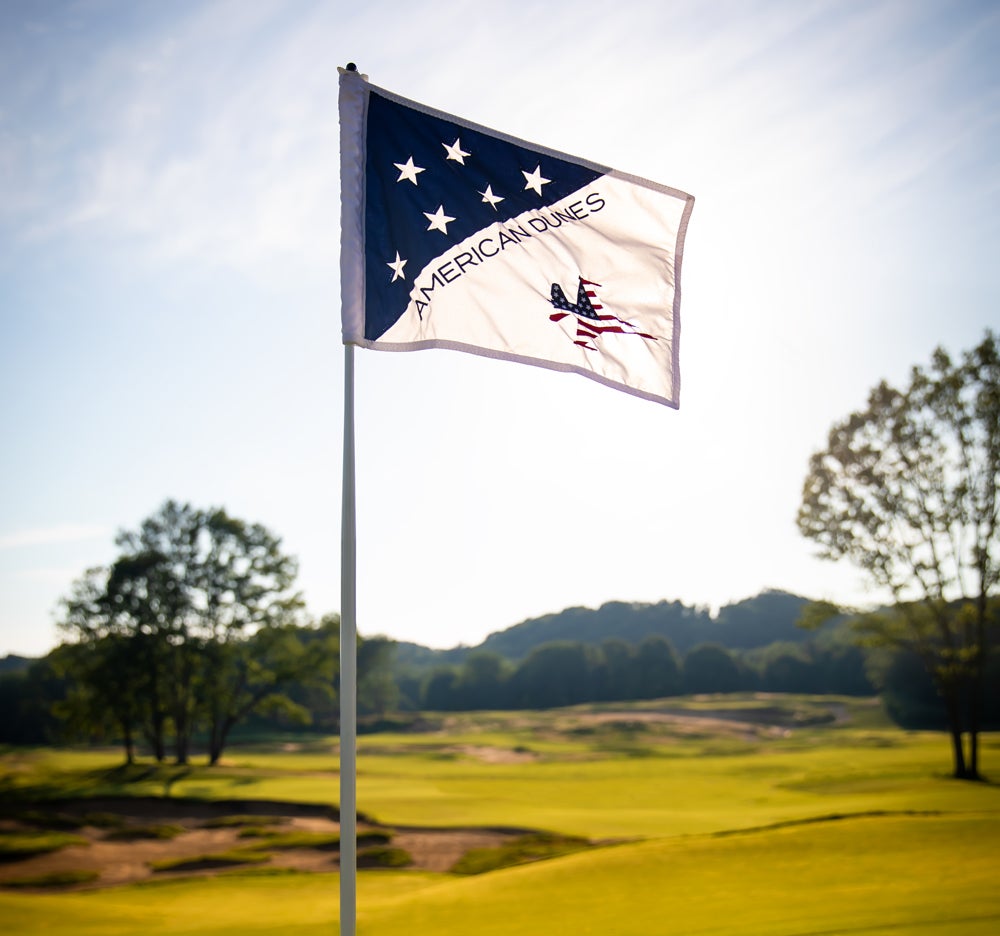 “I love the game,” Nicklaus said, “but I love my country even more.”

Central to the work was to transform what was a tight, tree-lined layout into something more in keeping with the sandy, lake-side site: a dunes course that rollicked with the contours of the land.

Mission accomplished with the design.

“I think we have produced a spectacular golf course,” Nicklaus said in a statement. “We have utilized and maximized the natural sand dunes we uncovered, and retained areas of beautiful trees. Playing through and around exposed dunes, as well as tree-lined holes in some places, creates a very special playing experience.”

But the architecture is not the foremost feature that makes American Dunes unlike any other golf course in the world.

“This is Jack Nicklaus, so the golf is going to speak for itself,” Rooney says. “But the message we are really trying to get across is that this is a place for people who are unapologetic in their celebration of God, country and golf.”

Every cent of profit from American Dunes will go toward the Folds of Honor Foundation, which provides educational scholarships to spouses and children of deceased and disabled military personnel. At $150, greens fees will go toward rounds that pay patriotic tribute almost everywhere you turn. Beside each tee box will stand three stone plaques, each conveying a different message: one will represent a Jack Nicklaus major championship victory; another will pay thanks to the private donor who sponsored that hole’s construction; and a third will tell the story of a Folds of Honor family.

Flags on every green will bear the American Dunes logo: Nicklaus’s signature Golden Bear, colored in the pattern of the Stars and Stripes. On a large dune beside the 18th green, 13 stones erected in the sand will symbolize the 13 folds made in the American flag at military funerals. A new stone will be added for every Folds of Honor scholarship granted that year.

These and other details were discussed Monday at a press conference at American Dunes, where media members were given a preview of the course. Nicklaus will be on hand Tuesday to cap the two-day sneak-peek celebration.

The official ribbon cutting is still months off. It is scheduled for May 2, 2021, the day that American Dunes opens for public play.