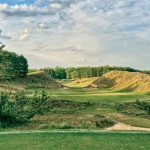 When Tobacco Road debuted in 1998, no one had ever seen such in-your-face architecture.

Two things need to happen for a course to make our ranking of the Top 100 Courses in the U.S. It must (1) earn many high grades from our raters and (2) avoid too many poor ones. Pretty simple, and easy to achieve for the likes of, say, Shinnecock Hills or Chicago GC. Hard to knock either of those! But as you go deeper down the list, a greater range of opinions unfolds.

Below, we’ve identified 10 courses, each unique in its own way, that at least some of our raters believe are Top 100 worthy. Yet all of these designs missed the cut — some barely and some by a lot. The reason? Too many negative votes.

That’s the thing about envelope-pushing designs: they stir passion but also polarize, and the straightforward, mathematical nature of our voting system makes it tough on courses that invariably attract a few naysayers.

Still, there is nothing we would change in our system as we pride ourselves on our uncomplicated, transparent voting process.

Points were assigned to each bucket; to arrive at an average score for each course, we divide its aggregate score by the number of votes. From those point tallies, the courses are then ranked accordingly. It is an intentionally simple and straightforward process that produces results that are widely lauded.

Each of the 10 courses below received votes in either six, seven or, in one case, eight buckets. Remembering that there are only 11 buckets in total, this exercise demonstrates the wide array of opinions among our raters. In recognition of how these courses stir passion and galvanize opinions, as well as how they pushed the design envelope, we doff our cap to them.

We’ve also asked our raters who submitted the low votes to consider another visit with a fresh set of eyes for our 2022-23 list. The results may well stay the same, but either way, we applaud the visionaries — both the owners and architects — behind these courses for daring to be different.

Note: Each course is listed with the place where it fell in our 2020-21 ranking.

This is the one pre-WWII course to make the list. One look at some of these massive green pads and no explanation is required as to how Charles Bank earned the moniker “Steam Shovel Banks.” Indeed, rumor has it one of his steam shovels is buried underneath the 6th fairway! The golf here is both adventuresome and bold, be it the massive Punchbowl green at 7, or the full-length Biarritz at 8 or the steeply uphill 9th. For a few, Banks’s deep greenside bunkers and rollicking greens on top of a hilly, rugged site overwhelm. Others see a series of arresting holes and think of it in the same terms as a Yale, just better presented.

The poster child for this list, this Mike Strantz design opened in 1998 and left observers gobsmacked. Thirty minutes from Pinehurst, this is Donald Ross country and people hadn’t seen such in-your-face architecture — ever! Starting on the 1st tee where the player has to split two giant mounds with his tee ball, you either embraced the challenge or it was a ‘one and done’ round. More than two decades later, the people have voted and it is as busy as any course in the area.

This Texas newcomer appeared in eight buckets, more than any other course. Built on a landfill just south of Dallas, it embodies as many classic design features as any course in the Top 100. Still, imagining that a course built on a landfill could possibly be Top 100 material takes some faith — or, in my case, just a three-day visit.

One of Coore & Crenshaw’s first designs, this course highlights the thrill of greens that slope from front to back. Judging approach shots into fall-away greens like the 6th, 7th, 12th, 17th and 18th feel like a chess match with the architects. Do you aim 30 yards short and high right of the 18th green — or is it 45 yards? The re-grassed fairways are fiery again, so all options are open to the player on this ‘gravity feed’ design whereby the golfer always needs to look toward the high side for possible answers to questions. Plenty of golfers — unthinkingly — fly the ball directly to the hole, only to see it disappear over the back, boiling their blood pressure. People who worship ground game options worship this design, even if it does require a cart to get around.

Give Eric Bergstol much credit for not only having the vision to create such a course from rubble but also for having the moxie to pull off its execution to the degree that he did. The views to the Manhattan skyline and of the enormous shipping vessels in New York Harbor captivate but you really go for the golf. Standout holes abound and include 2, 7, 10, 12, 16 and 17. The membership embraces two-ball games and match play, a tell-tale sign of a membership that enjoys a high golf I.Q.

This 2005 Mike DeVries course on the Upper Peninsula of Michigan is situated on what is (probably) too severe a site for a Top 100 course. Having said that, DeVries did everything he could to make the course wildly entertaining and fun. Rock outcroppings reflect its rugged environs and the greens, including such marvels as 7, 9, 13, and 17, are in a class by themselves for contour. A round here will linger in the mind far longer than on more demure courses. Similar to Kapalua, the fact that a cart is the preferred mode to get around the hilly site holds it back for some traditionalists.

A former panelist once noted that golf was a game of avoiding hazards; thus, the more challenging and numerous the hazards, the greater the course. In 1989, this course finished No. 72 in our World Top 100 (meaning U.S. Top ~35) but no more. Some of that comes with the build-out of homes on this residential design and some of it comes from a change in preference away from tournament-hardy, penal courses to ones that provide pleasure to a greater skill range on a regular basis. Play PGA West from a manageable set of tees, avoid the danger, and you will be immensely satisfied.

I love this Nicklaus design — and many other fans contend the best holes of the club’s 36 are from this course. Nicklaus requested the choppier land and then layered holes across it in all sorts of manners. Lay-of-the-land holes like 7, 16 and 17 are ripped straight from the minimalist playbook and look like they have been there for over a century. Other holes — like the 10th, with a bunker in the middle of the green — leave some golfers scratching their heads. Nicklaus fully intended the course to be bold and different, reasoning, “If somebody was going to travel three or four hours in a car to get to Dismal River, why would they do that and leave their course in Denver, or Minneapolis, or Omaha, or wherever it might be, to play something they have at home?” (Ed note: Nicklaus Design is an affiliate of GOLF.com’s parent company, 8AM Golf.)

This Lester George course in the foothills outside of Roanoke features the deepest hazards and wildest greens in the state. For some, that is a potent combination while others think it is over-the-top. Regardless, its loyal band of members, few of whom live in the area, travel for hours to get here. Such is its lure. If that’s not an indication of great design, what is?