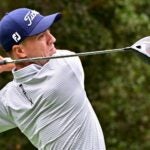 Two rounds are complete at the 2020 Zozo Championship, and now an exciting weekend awaits at Sherwood Country Club. Here’s what you need to know to watch the third round on Saturday.

Birdies and eagles have been dropping all week, but after 36 holes on a gettable layout at Sherwood, one man stands alone at the top of the leaderboard: Justin Thomas. Thomas fired his second-straight 65 on Friday to reach 14 under, giving him a one-shot lead. The World No. 3 has finished in the Top 12 in both events he’s played this season, and it looks like he’ll keep that streak going this week.

One of the other top scores from the second round belonged to Tiger Woods. Tiger charged back from an ugly first round to shoot a six-under 66, his best round of the year. Unfortunately for Tiger, that only improved his total score to two under, meaning he will have to put together two rounds for the ages beginning on Saturday to have any hope at defending his Zozo title.

You can find everything you need to watch the third round of the 2020 Zozo Championship on Saturday below.

How to watch Zozo Championship Round 3 on TV

Golf Channel will air the action for the third round of the Zozo Championship with three hours of coverage on Saturday from 5-8 p.m. ET.

How to stream Zozo Championship Round 3 online