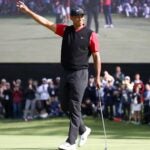 Tiger Woods celebrates after winning the 2019 Zozo Championship in Japan.

Tiger Woods won’t need to travel to Japan to defend his latest title. Woods has officially committed to the 2020 Zozo Championship, which due to travel logistics from the coronavirus pandemic has been moved to Sherwood Country Club in California.

“It is disappointing that we will not be able to play in Japan this year, but Sherwood Country Club will be a great backdrop for what I know will be a great championship,” Woods said in a release.

The new Zozo venue is a familiar one for Woods, and others, though. Sherwood Country Club was the long-time home of Greg Norman’s Shark Shootout and hosted Woods’ Hero World Challenge from 2000 to 2013.

Woods missed the cut at Winged Foot last weekend, but he was busy in the days after. He headlined the Payne’s Valley Cup at Big Cedar Lodge in the Ozarks to unveil his first public design, Payne’s Valley.