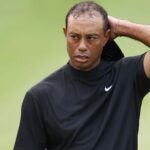 Tiger Woods has struggled with his ball striking during the opening round of the Zozo Championship.

Tiger Woods is not off to the best start at the Zozo Championship. Although Sherwood Country Club is a course where he owns five (unofficial) wins, the Southern California layout has stymied him so far. Through 14 holes, Woods is three over with a game that looks out of sorts.

But if you’ve had an eye on the opening-round coverage, congratulations, you’ve witnessed history. Just not exactly the type of history Woods wanted to make.

On the par-5 11th (his second hole of the day), Woods found trouble with his drive, leading to a disappointing bogey 6. On the 13th, also a par 5, more trouble: a double-bogey 7. The third par-5 of the nine, No. 16, was no kinder as Woods drove his ball into a hazard, leading to another bogey

Four over on three par-5s. Ouch. To squeeze more lemon juice on the wound, this was the first time in his PGA Tour career that he has ever made bogey or worse on three par-5s in a round. And he did it in the span of six holes! Sometimes it’s just not your day.

When considering that Woods has been playing in Tour events since his teenage days, it’s quite remarkable that this is the first time he’s made a mess of three par-5s in the same round. It also demonstrates just how much he’s taken advantage of these scoring holes throughout his career. Although he may not have always birdied the par 5s, he never let them make too much of a dent in his scorecard, either.

The good news is he’ll get another crack at those scoring holes on Friday. And if we know anything about Woods, he’s had a penchant for bouncing back strong. Don’t expect it to go down the same way tomorrow.

'It wasn't for lacking of trying': An unauthorized history of Charles Barkley’s tortured golf swing