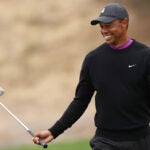 Tiger Woods is all smiles on the 8th hole at Sherwood Country Club on Friday.

Tiger Woods‘ last hole on Thursday was the 9th at Sherwood Country Club.

Woods’ last hole on Friday was the 18th.

Nothing, not even the nines he started on, was the same for Woods over a span of a day at the Zozo Championship.

Thursday, Woods shot a 4-over 76, the first round’s second-worst score – and just a stroke ahead of the first-worst. Friday, he made eight birdies and shot a 6-under 66. It was his best round in relation to par this year, and best since his 6-under 66 during the second round of the Hero World Challenge last December. (He also shot a 66 at the par-71 Northern Trust in August.) It tied his best-ever turnaround from a first round to a second.

“I think the overall, just overall, I hit the ball so much better,” said Woods, who is 2-under overall and 12 strokes behind leader Justin Thomas. “Yesterday was not that sharp, and today was a lot more sharp and a lot more crisp and clean.”

Especially on the par-5s. A lot more sharp, crisp and clean.

Thursday, Woods bogeyed two par-5s and double-bogeyed another. Over his first six holes. It was the first time in his career that he had made bogey or worse on three par-5s in a round. Friday, Woods birdied his first par-5, the 2nd. Then his second, the 5th. Then his third, the 11th. He parred his fourth, the 13th. (He missed an 8-footer for birdie.) Then he birdied his fifth par-5, the 16th.

On Thursday, he was 3-over on the par-5s. On Friday, he was 4-under. Seven strokes better over five holes. In a day.

“I felt like I really didn’t swing the club that poorly,” Woods said. “I was just a fraction off, and I got out of position a couple times. And as I said, didn’t play the par-5s well, and it just snowballed into a high number. Was never really able to get any kind of momentum going because I played the par-5s so poorly. Today was different. Got off to a much better start and kept rolling.”

The par-5s weren’t the only difference.

Better, too, is Woods’ surgically repaired back. Better than it was at his last event, last month’s U.S. Open, where he missed the cut.

Which is the best thing for him. He goes as it goes. And in three weeks, he’s going to this year’s final major, the Masters.

“I wish it could be good all the time,” Woods said of his back. “I have moments where it’s not quite – feels as elastic as I’d like it to be and unfortunately the U.S. Open did not help with the long rough, and did not drive it in the fairway enough times and put a lot of stress on it and shot high numbers.

“But I am moving a lot better. Having four weeks off was good, training sessions have been good, so everything’s kind of turned around.”