2020 Zozo Championship live coverage: How to watch Round 1 on Thursday 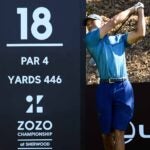 Tiger Woods practices at Sherwood prior to the 2020 Zozo Championship.

The 2020 Zozo Championship gets underway today, Thursday, October 22, at Sherwood Country Club in California. Here’s what you need to know to watch the first round.

Tiger Woods is back in action this week for the first time in over a month, and with good reason: Not only is he trying to prep to defend his title at the rescheduled Masters in a few weeks, he’s the reigning champ this week at the Zozo too. If Tiger wants to capture his 83rd Tour win at Sherwood, he’ll need to get off to a hot start on Thursday when he tees off at 1:45 p.m. ET.

But Woods will face stiff competition in the form of a bevy of Tour stars. Look no further than his own playing partners on Thursday, Xander Schauffele and Matthew Wolff. Schauffele is ranked No. 7 in the World and regularly threatening to go on a serious run, while 21-year-old Wolff is already a winner and rising quickly through the rankings.

That’s not the only star power packed into the limited-field event. Rory McIlroy is also in the mix, looking to get back to the dominating form he showed early in the year. Justin Thomas, Jon Rahm and Collin Morikawa will tee it up as well, as will Phil Mickelson, who after Sunday can call himself a two-time PGA Tour Champions winner.

Below you will find everything you need to watch the first round of the 2020 Zozo Championship on Thursday.

How to watch Zozo Championship Round 1 on TV

Golf Channel will air the action for the first round of the Zozo Championship with three hours of coverage on Thursday from 5-8 p.m. ET.

How to stream Zozo Championship Round 1 online

You can catch the first round Golf Channel TV coverage of the Zozo Championship on golfchannel.com. Fans can also view Featured Group coverage of the opening round all day Thursday via PGA Tour Live, though you will need a subscription to access both options.