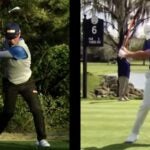 Their transitions from the top of the swing to the bottom features a rapid unwinding of the hips.

It’s doesn’t always make sense to compare male and female golfers — their body types and muscular systems can differ greatly — but occasionally we have no choice. A swing, a shot, a mannerism looks so similar that we can’t ignore the similarities.

You already know who McIlroy is, but we’re just now getting our first primetime look at Saso, a 19-year-old from the Philippines who dazzled evening viewers of the U.S. Women’s Open Thursday with a first-round 69. Saso is the 57th-ranked player in the world, playing in her third career major after a stellar junior career. But the McIlroy comparisons have everything to do with how they both move within their swings.

McIlroy is famous for his fluid, powerful swing. It makes him one of the best ball-strikers of his generation and consistently ranks him near the top of the PGA Tour’s rankings in Strokes Gained: Tee to Green. The number of pros who wouldn’t trade their swings for his is surely in the single digits. The hook here is that Saso, who works with former Japanese great Jumbo Ozaki, swings almost identically to McIlroy.

Moments after making the realization myself, Dan Hicks and the NBC broadcast team did, too, this time on the national broadcast. Need proof? Check out the screen grabs below.

Notice how similar the takeaways are, and where the club is positioned as their lead arms are parallel with the ground. Then, at the top of their swings, they both engage with the ground and unwind their hips in a flurry.

The biggest discrepancy (which is an overstatement) is in the last few moments before impact. Saso’s weight is a bit more back in her stance while McIlroy’s is very centered. Saso’s front foot actually rises up off the turf — a move reminiscent of Justin Thomas — while Rory’s lead foot is always planted. Besides that very slight weight transfer, both players release through the ball and find supreme balance at the finish.

Their final poses even look the same! Does it bode well to swing it like Rory? Yes, it undoubtedly does. The women’s game is having its own free-swinging distance chase, and Saso’s above swing serves as a good example; it traveled some 300 yards and found the fairway. If she continues to contend, be sure to look for more McIlroy comparisons on the broadcast this weekend.