Houston, we have a leader: After five-month wait, U.S. Women’s Open finally underway 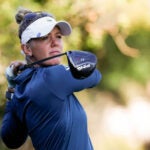 Amy Olson leads the U.S. Women's Open by one stroke over three golfers.

All eyes are on the women, and on the Lone Star State. It’s finally here, after a five-month delay, the U.S. Women’s Open at Champions Golf Club, deep in the heart of Houston. With the first round in the books and three more to go, there’s one thing we know for sure: If you wanna win this thing, this closeout December special, you better be ready to work. Because the golf courses are hard, the forecast is a mix of sun and lousy, the pandemic is hovering — and the occasion is BIG.

Amy Olson, tall, square-jawed daughter of North Dakota, 28 and looking for her first win as a pro, is leading after Thursday’s play on a clear, sun-splashed, late-fall day. (Olson, née Amy Anderson, has won a USGA title before, the 2009 U.S. Girls’ Junior Championship, played at Trump Bedminster; Jordan Spieth won the boys’ title that same week.) She shot an opening 67 with an ace, one clear of three players at three under and two better than seven players at two under. If she doesn’t sound like your perfect didn’t-see-her-coming surprise winner, then nobody does. Majors are funny things. Did you predict Sophia Popov winning the Women’s British Open at Troon in August? Don’t worry, neither did her caddie.

This was, and this will be, must-watch golf. On Thursday, the skies were blue, the rough was tan, the 36 fairways (two abutting courses are being used) were wide and green, and the 156 women on them represented maybe the greatest collection of female golf talent ever.

Your correspondent is following the action from home, in Philadelphia. Kathy Whitworth, greatest winner in LPGA history, is watching from hers, in Dallas. Jackie Burke, the event’s 97-year-old host and the founder of Champions, is practically on top of the action. Where are you watching from? Not Champions, in all likelihood. The pandemic is raging across Texas, and no fans are at the event. If you’re not playing in the thing, watching it on TV is the next best thing.

Olson, married to a North Dakota State assistant football coach, made her hole-in-one on the 16th hole of the Cypress Creek course, the seventh hole she played on Thursday.

“I had 141 to the flag, and the pin was on the right side of the green with the wind kind of coming from the right,” she told reporters after her round. “So I hit a fade to try to hold the wind, and it landed two paces short of the flag, had some good spin on it and just trickled in. We saw the whole thing, which was fun.”

Memo to young Ms. Olson: U.S. Opens are not supposed to be fun! But enjoy it while you can.

Last week, the LPGA made a stop in Dallas, and Angela Stanford won. The veteran golfer is one of seven Texas golfers in the field this week: Stanford, Cheyenne Knight, Brittany Lang, Kristen Gillman, Lindsey Weaver, Kaitlyn Papp and Stacy Lewis. Plus, Gerina Pillar played golf at UTEP for four years.

Lewis is a member at Champions, and a veteran U.S. Open contender. This quote shows her hyper-fluency in the language of U.S. Opens: “We had absolutely perfect weather today, and four under is leading. I don’t think scores are going anywhere.”

You could feel the tension 2,000 miles away, or 200. Whitworth, 81, won 88 LPGA events, but never won a U.S. Open. She’s thrilled to see the national open being played in Texas, where she has lived most of her adult life. She knows some of the players because many have played in the junior girls event named for her, played each year in Fort Worth, where, it happens, Burke is originally from.

The history of women’s golf in Texas is a rich one. Betsy Rawls, a Texas golf legend, won four U.S. Women’s Opens. Meg Mallon, not a Texan, won the only other U.S. Women’s Open ever played in Texas, in 1991 at Colonial. This week, a new chapter of women’s golf in Texas is being written. Olson will win this 75th playing of the event, or not. Stacy Lewis will win, or not. But somebody will.

“If you’re leading or near the lead after three rounds, you have to realize, that what you’re doing is working,” Ms. Whitworth said in a phone interview this week. “It’s a U.S. Open. You’re going to hit bad shots. What you can’t do is hit two bad shots in a row. So if you hit a bad shot, take a breath and say to yourself, ‘Quit doing that.’”

She knows, she knows: Easier said than done. The women gathered this week at Champions, three hours down the road, are going to discover that for themselves this week.