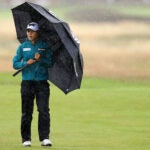 Lydia Ko tried to stay dry during her Friday morning round.

On Friday, Inbee Park called the second round of the Women’s Open “the toughest conditions I’ve ever played.” And she carded the low round of the day!

It was glorious madness for the first two days at Royal Troon in Scotland, with winds gusting into the 40s and sideways rain wreaking havoc on much of the field. It was challenging golf, though it made for particularly terrific viewing from the comforts of a couch. Just how hard did it get? Well, Nelly Korda admitted being scared over one-foot putts. Here are five numbers to help break down what we’ve seen so far.

As in, the number of players under par through two rounds at Royal Troon. Dani Holmqvist of Sweden battled to a second-round 70 to go along with her opening round of 71. Then she got to sit and watch as her two-day score of one under looked better and better and better.

“It was tough out there,” she said after the round, a proper understatement. “Yeah, one under feels like a lot lower than what it is; every hole and every shot is kind of a challenge.”

Holmqvist has hit just 19 of 36 greens in regulation but has leaned on her short game, which she has sharpened of late with help from a familiar name: Brad Faxon. The two Jupiter residents connected over the unexpected offseason, looking for an edge.

“We’ve been working quite a bit on the course together. Just mindset and short game,” she said. “But yeah, he’s a great coach but he’s also a great friend to have in Jupiter.” So far, so good.

That’s nine (9!) shots over par, as in the cut line at this week’s Women’s Open. The event in Scotland showcased precious birdies and commonplace bogeys. For American golf viewers, the morning viewing of the women’s event clashed with the men’s event at TPC Boston, where Scottie Scheffler shot 59, Dustin Johnson was 11 under through 11 and the cut line slipped to three under.

As in, the number of golfers who posted a round in the 80s and still made the weekend. That’s pretty crazy.

Lopez followed up an opening 71 with a second-round 80 (and a particularly colorful scorecard) to make the weekend by a single shot.

Bronte Law rallied after an opening 80 with a particularly sparkling four-birdie, three-bogey effort on Friday. Her second round was bettered by just two golfers in the second round.

The final 80-shooter to advance to the weekend was Amy Olson, who played arguably the best round of her life on Thursday, shooting 67 to gap the field. But she came roaring back to reality on Friday, making six bogeys in her first 11 holes and adding in two double bogeys on the way in en route to a 10-over 81. Still, Olson is hardly out of the tournament at six over par, just seven shots off the lead. Here’s hoping for another round in the 60s come Saturday.

I know, we just did three a minute ago, but let’s do it again: Royal Troon has yielded just three rounds in the 60s thus far. Amy Olson’s first-round score of four-under 67 was fantastic, as were the matching two-under 69s posted by Minjee Lee and Inbee Park. That’s it for rounds in the 60s.

An interesting note on the subject: Of the three, only Lee (T4) is inside the top 15. This week, damage control is just as important as going low.

“I really thought that it was almost impossible to shoot under par on the golf course in these conditions,” Park said. Then she did it anyway. Respect.

Curiously, the upper boundary of scores isn’t quite as dramatic as you might expect, given the challenges: Nobody posted a score higher than 85. Single-digit handicaps at home could relate, for once, seeing pros battle to break 80. Those single-digit handicaps just wouldn’t have particularly enjoyed keeping score under the same conditions themselves.

“You have to know that sometimes bogey is not going to be the end of the world,” said Lydia Ko. She’s walking the walk, too, and managing her bogeys about as well as anyone en route to 72-71 (T4).

Given the conditions, you’d be hard-pressed to count anyone out heading to the weekend.

Oh, and there’s one final image to leave you with as the golfers steel themselves for a weekend of battle. The visual comes from Lindsey Weaver, who’s tied with Ko at T4 — but is doing so without a caddie. Her push-cart is over a decade old, so the brakes don’t work particularly well, which led to one unfortunate gust.

“I was in one bunker and my push cart flew into another bunker and toppled over,” Weaver said. “I’m still trying to get a lot of the sand out of my bag.”