Coffee golf is back! The Women’s Open takes center stage this week at Troon 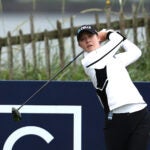 Just two weeks after the first major of the year, we are treated to the only Open Championship of 2020 with this week’s Women’s Open at Royal Troon. That’s right folks, we get coffee golf this week, beginning Thursday morning on Golf Channel. Here are five reasons why you need to tune in for it.

This is a big deal. It was only four years ago when Royal Troon wasn’t allowing female members. And now in 2020, after allowing women to be members of the club, it is now hosting the biggest women’s event in the world.

2. The Postage Stamp gets even more real

Much has been made of female pros having much more relatable ball speeds and distances to the rest of the golfing populace. Well, we’ll get to see that idea on full display on one of the toughest holes in the world. The par-3 8th at Troon is famous for rejecting tee shots that aren’t exactly precise in how they enter the green. Too much spin? You’re in the front bunker. Not enough spin? You might run off the back or either side.

3. Conditions are going to be really tough

Troon is located just off the shore of the Firth of Clyde, and players will feel it. Thursday and Friday are expected to be very windy — 20 mph during most of the day with gusts up to 45 mph. Anyone expecting calm conditions can tune in for themselves early Thursday.

Kang has been the hottest player in the world since the LPGA restarted, winning both of the first two events in Ohio. With another win, Kang could overtake Jin Young Ko as the No. 1 player in the world. She would be just the third American to be ranked No. 1 in the history of the women’s game, and first since Stacy Lewis.

5. It will be a great study in course setup

As R&A CEO Martin Slumbers reminded us Wednesday, Troon is very much an out-and-back course in which the first seven holes travel south on the property and many of the remaining 11 holes bring players back to the clubhouse. With strong winds expected out of the south or southwest, setting up the course to fairly test the players is important.

“We have looked to make sure that carries can be made on some of the par-5s, but we’ve also looked to make sure that bunkers that are meant to be in play off the tee are in play off the tee, even if they are hitting a 20-, 25-mile-an-hour wind,” Slumbers said. “And I think that’s important, in terms of we’ve eased it but we have not taken the full teeth out of the golf course.

“And then when we turnaround, we are going to shorten one of the par-3s, the one into the wind. When we turnaround, once they get on to the 13th tee, they are downwind the whole way, which will make the back nine, which as you know is the toughest nine, a bit more playable and hopefully they will be able to score.”