#AskAlan mailbag: Will Tiger Woods win the PGA Championship by 10 or 15 shots?

In this installment of the #AskAlan mailbag, GOLF senior writer Alan Shipnuck fields your questions about the 2019 PGA Championship, including Tiger Woods’ chances to win, the best player to never win the career Grand Slam and more.

I’m not sure which set of fans are more obnoxious, Tiger or Thrones. And I say that affectionately, because all the hysteria that surrounds their respective performances is part of the fun. A vintage Tiger blowout would be epic, and great fun to watch. But Bethpage is so tough, and the cost for making a mistake so high, I think we’re going to see a bunched leaderboard. It will surprise no one if Woods is at or near the top late on Sunday.

This is an excellent list, and from it I’ll take Spieth. Beyond completing the Slam, it would pull him out of the worst slump of his career and reestablish Jordan as one of the game’s superstars. A Fowler win would be impactful, too, especially in the shadow of Gotham, the media capital of the world. Anything Tiger wins from this point forward is pure gravy. Phil deserves a similar victory lap, and given his endless chances five major championship victories does seem a little light, but winning this PGA wouldn’t really change his legacy.

News
Tiger Woods has the skill to win major No. 16 this week, and he’s got the smarts, too

As a Rochester native who grew up often freezing his little tire gauge off late into spring, do you think the PGA of America fully understands that “not typical” and “not unusual” are not mutually exclusive and that they could get absolutely pantsed by Mother Nature here in May? -@Lou_TireWorld

Thanks goodness the Long Island forecast has improved for the tournament rounds because a rainy Bethpage with temperatures in the high-40s woulda been miserable, and quite a disconcerting way for the PGA Championship to begin its new May time slot.

As I’ve touched on elsewhere, I think the date change is great for the tournament in every other way, but the upcoming slate of Northeast venues is worrisome. They were locked in before the PGA Championship moved from August to May, and I’ve heard some rumblings that the leadership at Oak Hill (in Rochester) has had a few conversations with PGA officials about swapping out the 2023 Championship for a future Ryder Cup. Going forward I expect the PGA of America to be less Northeast-centric, but they can’t abandon this part of the country entirely, so we’re all going to have to get used to being at the mercy of the weather gods. Still, I greatly prefer chilly to stinking hot.

The August date led to numerous first time major winners and lots of younger champs, possibly due to heat and humidity impact. Will the move to May lead to more “stars” winning who had geared up for the Masters? -@MikeCronin12

This is an interesting point, but I don’t think proximity to the Masters is the key factor. The August heat forced the host venue’s greens to be heavily watered and thus made them soft, so the PGA Championship setup was often similar to everyday Tour conditions. This helps explain the glut of random champions. Firm, fast greens very quickly separate the best players from those who are just hanging on. I do think that May will allow for sterner setups, which should favor the stars, who become exactly that because they can handle more exacting conditions.

What percentage of the field believes they have a legit chance? And if Koepka overpowers the course he’s the best in the world, right? #askalan -@MarVistaPete

In a podcast last year Brendan Steele told me he thinks 50% of the Tour is afraid of winning. This week you can add two dozen club pros who know they don’t have a prayer. Throw in the pressure of a major championship, the brutality of Bethpage, the intimidation factor of a mouthy gallery and we’re quickly down to maybe a quarter of the field who truly believe they can do it. That’s 40 guys. A third to a half of them won’t have their A-game this week, just because that’s golf. So, if you’re an elite player with some actual confidence, you only have to beat a couple dozen colleagues to win the PGA Championship! Per Brooks, are we still debating his place in the game? He’s the best player in golf until proven otherwise. 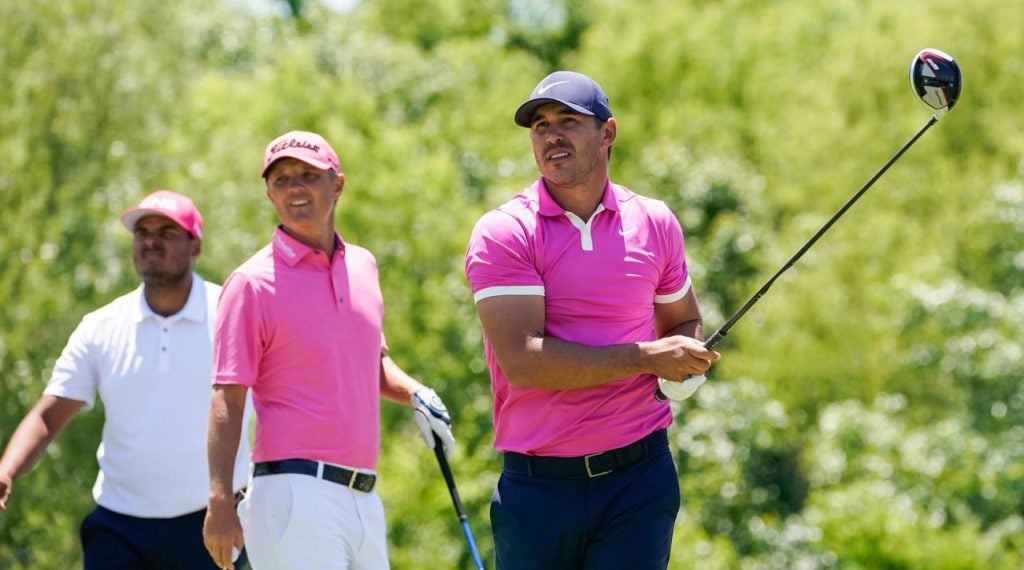 Defending champion Brooks Koepka is one of the favorites to win this week.
Ray Carlin/USA TODAY Sports

What makes a major distinct from other PGA tournaments? In tennis, a Grand Slam differs in number of players, number of sets, different surfaces and different continents. In golf? -@PeteKnot

More than anything, it’s history and tradition. The course conditions of the Scottish Open are pretty much the same as what we get at the Open Championship a week later, but it’s not the Scottish that led to Bobby Jones’s deification, compelled Ben Hogan and Arnie Palmer to cross the ocean chasing history, birthed Seve and witnessed some of Jack and Tiger’s defining moments.

Strength of field is part of what makes the majors momentous, but the cast of characters is as deep at the WGCs as at the Masters; the difference is all the ghosts rattling around Augusta National. Tough setups define the U.S. Open, though you can say the same about Valspar and the Honda Classic. It all comes down to the mystique of the majors – as the game has changed and evolved these are the four tournaments that have stood the test of time and always gathered the best players on the best courses. That’s why we care about them as the measuring stick of true greatness.

How many short hitters do not feel they have a chance this week? -@CarsleyGolf

Most. And they are at a decided disadvantage on such a brawny course. But if the likes of Zach Johnson can win at Augusta National and St. Andrews, anything is possible.

How often do you get to play the courses you are reporting from for the current competition? -@_Qonquistador

The U.S. Open always has a media day a month or so ahead of the tournament and getting to play the course is the inducement to actually show up and listen to various dignitaries offer windy commentary about the tournament. The PGA Championship used to do this, but we’ll have to see how it shakes out with the date change. The Masters famously has Media Monday, and at the other three majors you can usually sneak on to the tournament venue the Monday after it ends, if you know the right people. But I almost never partake in any of this. Major championships are long work-weeks and (first-world problem alert) once the tournament is over I’m usually fried and ready to head home.

With everybody on Grand Slam watch at the PGA Championship; who is greatest player (with three of the four) never to win the Grand Slam? #AskAlan -@GolfFoodAddict

Sam Snead. The precision and patience demanded by the U.S. Open exposed the lack of discipline and course management in this awesome natural talent. Tom Watson and Arnold Palmer both have arguably superior c.v.’s to Snead, but failing to win the PGA Championship is not the same kind of indictment of a player. If you have the talent and mental toughness to win a U.S. Open, you’re certainly good enough to win a PGA Championship. They just never made it happen.

Trinity Forest, site of the AT&T Byron Nelson, looks absolutely dreadful on television. Can you think of a course that looks as bad? -@JoeGunter

The Old Course. Other than 1 and 18, framed as they are by the auld grey toon, it’s a moonscape whose charm and subtleties don’t really translate well to TV.

Which golfer in the field this week who has yet to win a major cares the least about winning a major? -@GrantLeigh3

Pat Perez. He would certainly enjoy the attention and elevated status that would come with winning one, but that’s different from venerating the achievement itself. Perez loves the competition and he loves the money that comes with his career, and that’s about it. He once told me he doesn’t care about “all that moldy old stuff” – meaning golf history.

Could the pros just play one event a year using wooden drivers? -@RobFord58

That would be awesome. How about at the Greenbrier? That course is waaaay too easy for the modern game, but with its throwback vibe it would be the perfect setting for some old-school golf. It’s a nice business opportunity for the manufacturers, too. In the last year or so I’ve encountered a handful of folks wielding the gorgeous Linksoul persimmons. It’s such a cool sound when they’re well struck. With the ongoing obsession over super-premium equipment I have to think there is a market out there for more persimmon.

I keep abreast of the modern game by considering the thoughts of Bamberger, Shipnuck and Diaz. But if I wish for a wise insight into, respectively, Jones, Hogan and Nicklaus, who might I read? -@MarkOli86637797

Well, that’s heady company – two friends and mentors and my two favorite voices in the golf media. Anyway, Bobby Jones was nearly as good with a typewriter as a mashie, so start with his own musings. “Down The Fairway” is one of my favorite golf books and tells you so much about Jones, the golfer and the man. O.B. Keeler was Jones’s faithful wingman and his book “The Bobby Jones Story” is a knowing, intimate read. Dan Jenkins was famously close to Hogan, and the Hawk makes significant cameos in all of the Jenkins anthologies. But Curt Sampson wrote the definitive biography of the man, entitled “Hogan.” It’s surprising that golf’s greatest champion has not inspired many great books, whereas Arnold and Tiger each have been the subject of many strong reads. My favorite Nicklaus book is Dave Shedloski’s “Golden Twilight,” an elegiac look at Big Jack’s career as he was saying goodbye to the tournaments that defined him.

I’d put $50 on Brooks and spend the rest on greens fees, or a good meal.

Do you thoughtfully review your round of golf? If so, What are your measures?

‘Thoughtfully’ may be a bit strong, but I do often reflect. I try to think back to all the positive things I did during the round. Even when I feel like I played so-so, I’m often gratified to discover that I hit a bunch of good shots. And I will analyze the crappy ones, too. Was it the right decision? Was there a smarter play to be made? What was I thinking about over the ball? Hindsight clarifies a lot of stuff. Years and years ago I kept a little notebook in my bag in which I’d write down swing thoughts from good rounds, or little epiphanies I enjoyed. It was always really helpful to look back on that notebook, especially when struggling. As I type this I’m resolving to restart that little tradition. Thanks for the reminder.