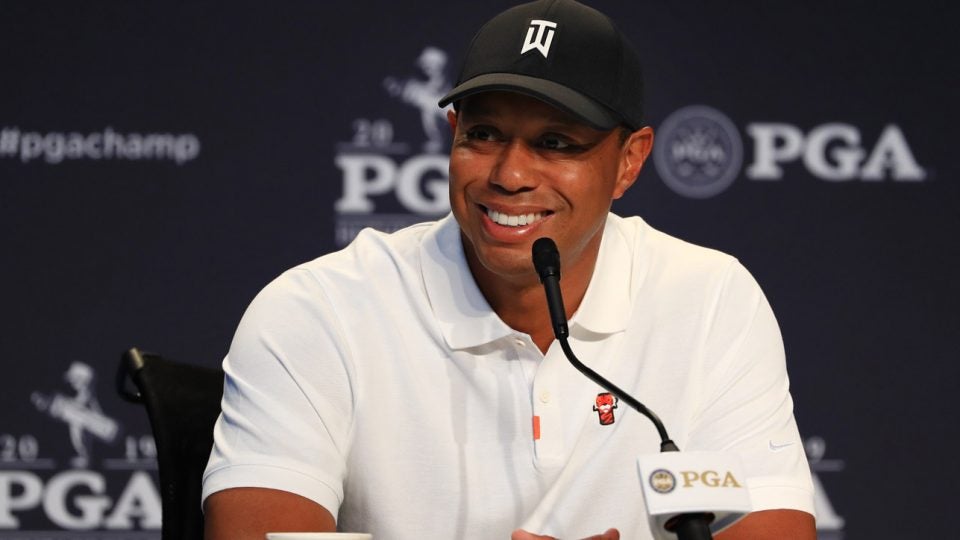 Tiger Woods pictured during his pre-tournament press conference for the 2019 PGA Championship on Tuesday at Bethpage Black.
Getty Images

Tiger Woods has always been a noted trash-talker during rounds with friends, but in the old days we rarely got to see that human side of Woods in public. Not anymore. On Tuesday in front of a room full of reporters at Bethpage Black, Woods roasted fellow PGA champion John Daly for using a golf cart at this week’s PGA.

Last week, the PGA of America approved 53-year-old Daly’s medical exemption to use of a golf cart during the 2019 PGA. Daly admitted he was worried about fan’s reaction to the move. What he probably didn’t think to worry about Tiger’s response.  When he was asked about it during his pre-tournament press conference Tuesday morning, Woods didn’t disappoint.

“This is a bigger golf course, there’s a lot of property,” Woods began his response. “There’s definitely going to be a component to stamina as the week goes on, four days over a tough championship that is mentally and physically taxing takes its toll.”

Then, instead of offering up the canned response many pros — and perhaps the old Tiger — would have given, Woods delivered a pointed jab.

“As far as JD taking a cart? Well,” Tiger said, before pausing as a wide grin broke across his face. “I walked with a broken leg, so…”

The laughs that followed from Tiger’s ribbing proved that it was all in good fun and not a serious criticism of Big John.

As he referenced in his dig, Woods famously limped his way to a triumphant victory at the 2008 U.S. Open with an injured knee and a stress fracture in his leg.

As for Daly, he’s in the field this week thanks to a lifetime exemption from his PGA win at Crooked Stick, which made the unknown, mulleted golfer an instant folk hero. He backed it up with a victory at the 1995 Open Championship at St. Andrews.

The admiration Daly earned from those wins has yet to wear off, and it’s helped him survive repeated struggles on and off the course in years since. Daly now plays on the PGA Champions tour, where he won the Insperity Invitational in 2017.