Tiger Woods has the skill to win major No. 16 this week, and he’s got the smarts, too

FARMINGDALE, N.Y. — The best golfers have astounding memories, for courses, for shots, for tournaments. Jack Nicklaus can tell you what he did in junior tournaments in the 1950s as if they were played yesterday. He’ll spell the last name of the kid he was playing with. Tiger Woods is third on the all-time Golfers with a Good Memory list, but he’s trailing Ben Hogan by only the slimmest of margins. And now that Tiger is coming back to a course where he’s had success — when Woods won the 2002 U.S. Open here, on the long, hilly Bethpage Black course, he was the only person to break par — his good memory will only help him. In other words, yes, he’ll probably win this week.

Now the memory thing will only take you so far, of course. How useful is a good memory without expert execution? It’s not. But there’s a lot to be said for knowing how a putt will break, when a driver is too much club and what it’s like to be in the hunt. One thing, among many things, that became obvious in Woods’ win at Augusta one month ago was that Woods remembered what it’s like to play a hard course in an important tournament while in contention. Yes, you can break out the bike-riding analogy. Tiger’s 43 and he’s been playing competitive golf for about 35 years now. It wasn’t like he forgot how to win, or how to play shots under pressure, or how to read the 16th green from the 16th tee.

At his pre-tournament press conference on Tuesday, Woods began the half-hour session by remembering his first PGA Championship, at Winged Foot, in 1997, four months after his historic 12-shot win at Augusta at age 21. Davis Love III won that PGA Championship. “The golf course was everything I thought it was and more. You couldn’t have had a more fairy-tale ending, with Davis holing that putt with his mom there. So it was a fantastic week.” He might have described the closing rainbow, except for the fact that he is a professional athlete.

At other times, he recalled that Arnold Palmer had played in 50 Masters tournaments and that Nicklaus played with Gene Sarazen in Sarazen’s final PGA Championship. He remembered playing Bethpage’s par-4 7th hole with a 3-wood and a 7-iron in 2002. He remembered the bomb he made on 17 at Medinah when he won his first PGA Championship, and his second major, in 1999. There’s nothing unusual about any of this — at every pre-tournament press conference, he rattles off all manner of arcane, personal information. It must be evidence of a brain that functions at a high level. 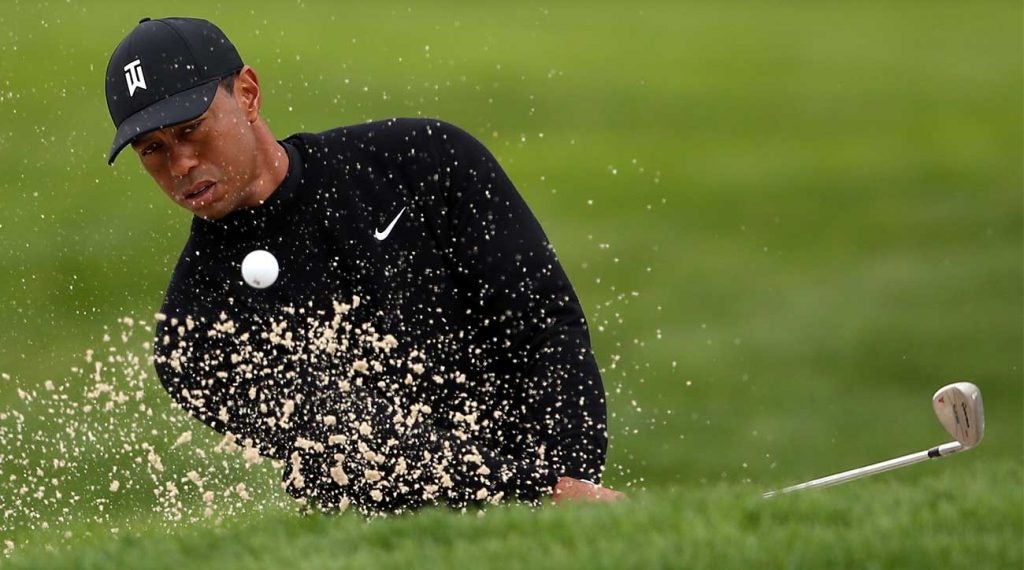 Tiger Woods blasts out of a bunker during a practice round at Bethpage Black on Tuesday.
USA Today

That’s probably one of the most underrated aspects of Tiger’s makeup, his intelligence. One of the most striking parts of Woods’ 28-minute GolfTV post-Masters interview is how he processes information. “When I got down 13, I had the chance to see the board and see where everybody stood. The next board I see is not until 15. There’s no board on 14. So, get a good understanding, see where they all are, look at what holes they’re on, in case I hear any roars, and who that might be. Obviously, there’s significance to certain roars. I want to know what players are in what position. So I know what’s going on.” For Woods, the golf course has always doubled as a chess board. All the while he was calculating how many of his competitors could get to 14 under par.

Nobody is going to get to 14 under par this week at the PGA Championship, but the winner is going to be the person who shoots the lowest score for 72 holes. That takes athletic skill, but memory and intelligence help, too. In golf, your athletic skill is your offense. Your memory and intelligence is your defense. You can win on skill alone. But if you’re trying to win a 16th major, the whole package is a nice thing to have.

Michael Bamberger may be reached at michael_bamberger@golf.com.