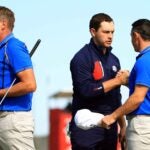 Patrick Cantlay after his match Friday morning with Xander Schaufelle against Rory McIlroy and Ian Poulter.

HAVEN, Wis. — When pairings and matches are announced at a Ryder Cup, players typically have a stock answer when asked about the opponents they drew. Daniel Berger dutifully delivered some version of that response on Thursday evening when asked about his Friday-morning foursomes match with Brooks Koepka against Englishmen Lee Westwood and Matt Fitzpatrick.

“I don’t think it really matters,” Berger said. “We have to go out and play, and whoever it was, whether it was their strongest team or whatever, we have to play good golf.”

That’s true, of course, but also true is that guys often do care who they face — they’re just reluctant to disclose it publicly. Which is why Patrick Cantlay’s comments Friday morning were so refreshing. Minutes after Ryder Cup rookies Cantlay and Xander Schauffele soundly defeated Euro stalwarts Rory McIlroy and Ian Poulter, 5 up — part of a resounding 3-1 foursomes session win for the Americans — Cantlay was asked if he could have dreamed of a Ryder Cup debut like this.

“Yeah, it’s exactly what we wanted,” he said. “We want those kind of match-ups. I think I speak for Xander a little bit here, but that’s what it’s all about. We were excited when we saw that pairing, and all the pressure is on them. They have seen it all and they are expected to maybe have a little veteran edge, and I was really glad we got that pairing.”

It showed, starting with a birdie at the 1st and 1-up lead that Cantlay and Schauffele would quickly build to a stunning 5-up lead when Schauffele buried a 11-footer for birdie at the par-5 5th. “Best start I could imagine,” Cantlay said. “Xander rolled in that putt on 5 and then we were rolling. I’m really glad we kept our nerve and kept our foot down.”

McIlroy and Poulter clawed back to 3-down through 11 but it wasn’t to be. With two more birdies at 14 and 15, Cantlay and Schauffele closed out the match, 5 and 3.

“Yeah, they are rookies, but they are not rookies,” McIlroy had said of his opponents on Thursday evening. “I think they are very experienced players. … It’s going to be a great match. Poults and I just need to go out there and play our game and if we do that, we’ll put some points on the board.”

Alas, Cantlay and Schauffele had another plan in store.